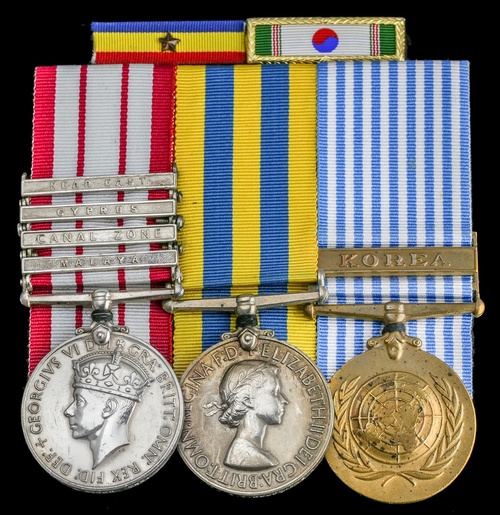 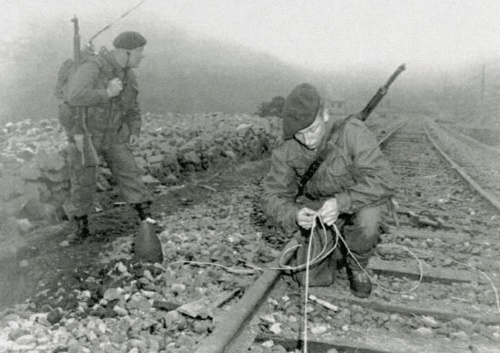 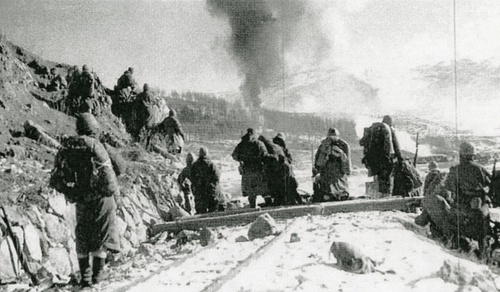 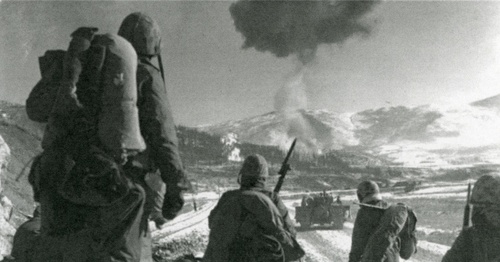 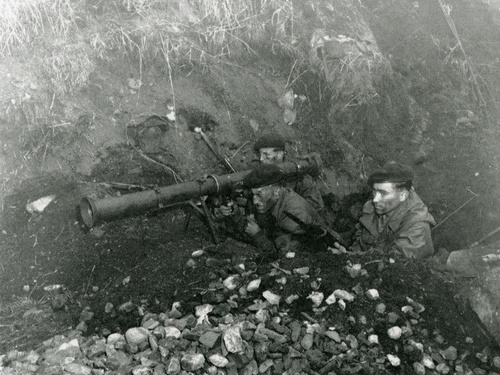 The impressive campaign group of three awarded to Marine R. A. Gooch, Royal Marines, one of 'The Chosin Few' who served with 41 (Independent) Commando during the Korean War, a hard-fought unit which gave valuable service in the 'Hellfire Valley' at the Battle of Chosin River and had the rare distinction of earning both the United States and South Korean Presidential Unit Citation, besides seeing varied service across a further four conflicts

R. A. Gooch enlisted in the Royal Marines following the end of the Second World War. Serving in 3 Commando Brigade, Gooch would have undertaken extensive training with his unit in Hong Kong. Based at Victoria and Kowloon from July 1949, it carried out defensive operations and amphibious landings up into the New Territories whilst on internal security duties. By May 1950, with the onset of the Malayan Emergency the unit was swiftly dispatched - together with a Squadron of 4th Hussars and 22 Special Air Service - to penetrate into guerilla-filled territory in northern Perak, being based at Ipoh.

In August 1950, following the outbreak of hostilities in Korea, Admiral C. T. Joy, Commander United Nations Naval Forces, suggested the British provide a small, specialist and highly skilled force capable of raiding the coasts. A few days later - on 18 August - No. 41 Commando was reformed under Major D. B. Drysdale, but it would total just 300 men - 'half a commando'. Gooch was among the new intake and joined the Commando at Camp McGill, Yokosuka, where the men were issued with American arms and underwent intense familiarisation and training before entering the fray.

The unit went operational on 12-13 September when it assisted in the Inchon landings, offering beach reconnaissance from H.M.S. Whitesand Bay. Under the command of Lieutenant D. G. Pound, the men of 'Pound Force' were attached to the United States Army Special Operations Company.

They were subsequently employed for three daring raids to cut railways along the north-eastern coast, 67 troops being landed at Chongjin on 2 October from the American submarine Perch. With the torpedo tubes removed, Perch took the troops close in to coast before they boarded 10 inflatable boats to lay anti-tank mines to blow sections of vital coastal railway. They suffered the first casualty of the War, with Marine P. E. Jones losing his life, but the cause was a success overall.

Subsequent - similarly daring - raids in the following days saw the Commandos being landed from the U.S.S. Wantuck, again to blow tunnels, bridges and lines. Returning to Japan at the end of the month, the men gained valuable time to re-group and undertook training on the slopes of Mount Fuiyama.

Having re-joined the United States X Corps, consisting 1 Marine Corps and 7th Cavalry, the Americans landed on the north-east coast. They pushed toward the Chosin Reservoir in late November 1950, crossing the 38th Parallel which in turn resulted in the Chinese Army entering the War. By 25 November, two American Regiments had reached the east side of the reservoir and intended to push north to the Chinese border. 1 Marine Corps were posted on the main supply route, from Hagaru and Koto-ri. Little did they know that a full-scale Chinese offensive was about to break. That very night Chinese attacks came along the entire 30 mile stretch they held and the further 70 miles to the coast. By the morning they held three isolated perimeters, at Yudam-ni, Hagaru and Koto-ri. The 235 men of 41 Commando, Royal Marines arrived at Koto-ri, the furthest south, on 28 November, initially in a reconnaissance role. This was soon out of the question, since mere survival was the only option.

On the morning of 29 November, 'Task Force Drysdale' was mustered. Under the command of Lieutenant-Colonel Drysdale, it numbered 922 men and 141 vehicles, having been bolstered by U.S. Marines and Infantry. The mission was simple: reach Hagaru and reinforce. There was no time to feed the men before they marched off and they soon met resistance, just 4 miles north of Koto-ri. What was to follow was remarkable, the Task Force coming under constant and destructive attack for the following 17 hours. They were ambushed as soon as they reached 'Hellfire Valley' above the Changjin River. A phosphorous bomb obliterated the ammunition vehicle, splitting the rear of the convoy and dropping a number of American Infantry who thought better than to continue. In bitter temperatures, the casualty rate was over a third that night. Commandos and U.S. Marines fought side by side along the road, with the commander being wounded on the way. A number were forced to surrender but 556 made it through. Gooch was one of the lucky ones.

Having reached the surrounded Hagaru, the plan was for the reinforcements to rest up and then assist in the withdrawal through enemy country. It was not to be, for 32 of 'B' Company were sent to take a hill on the entrance to Hagaru that very same day. They did eventually set out on 6 December, with some 15,000 men on the road back to Koto-ri, once again in dreadful weather. It was summed up well by the Divisional Commander:

'Gentlemen, we are not retreating. We are merely advancing in another direction.'

Having marched for 38 hours to reach Koto-ri, 41 Commando were sent into a snowstorm to patrol around the surrounding high ground on 8 December, only to be called in to march with the 5th U.S. Marine Column to the Hungnam Bridgehead. They finally reached the port on 10 December and were embarked with 22,000 U.S. Marines to Pusan.

During those few short weeks, the men of 41 Commando had played a vital role in the retreat. They had suffered losses of 13 killed and 39 wounded, with another 27 posted as missing - almost a third of the force. Gooch and his fellow Marines are to this day are referred to as 'The Chosin Few'.

Drysdale and his men would return to Korea before war's end, but only from its base in Japan on raids. The crowning glory would have to be the Sonjin Raid on 7 April 1951, on which occasion the entire unit streamed ashore at 8 a.m. to demolish coastal railways. With fire cover from U.S.S. Saint Paul, no casualties were taken and the raid was expertly executed.

The unit was awarded the United States Presidential Unit Citation in 1953, but regulations precluded foreign units receiving the award. This was changed in 1957 and Prince Philip duly accepted the distinction as Captain-General. It was the first time since the Defence of Legations that British and American Marines had fought side by side. The South Korean Presidential Unit Citation was also subsequently issued.

Gooch would subsequently see active service in the Canal Zone, Cyprus and during Operation "Musketeer". For the latter he is recorded as having served at Brigade Headquarters, likely in the role of Driver. It would appear that Gooch also served at onetime aboard the Royal Yacht Britannia, possibly in a musical capacity; sold together with Royal Marine cap, shoulder and arm insignia and badges, Britannia badge and housed in a file of copied research. 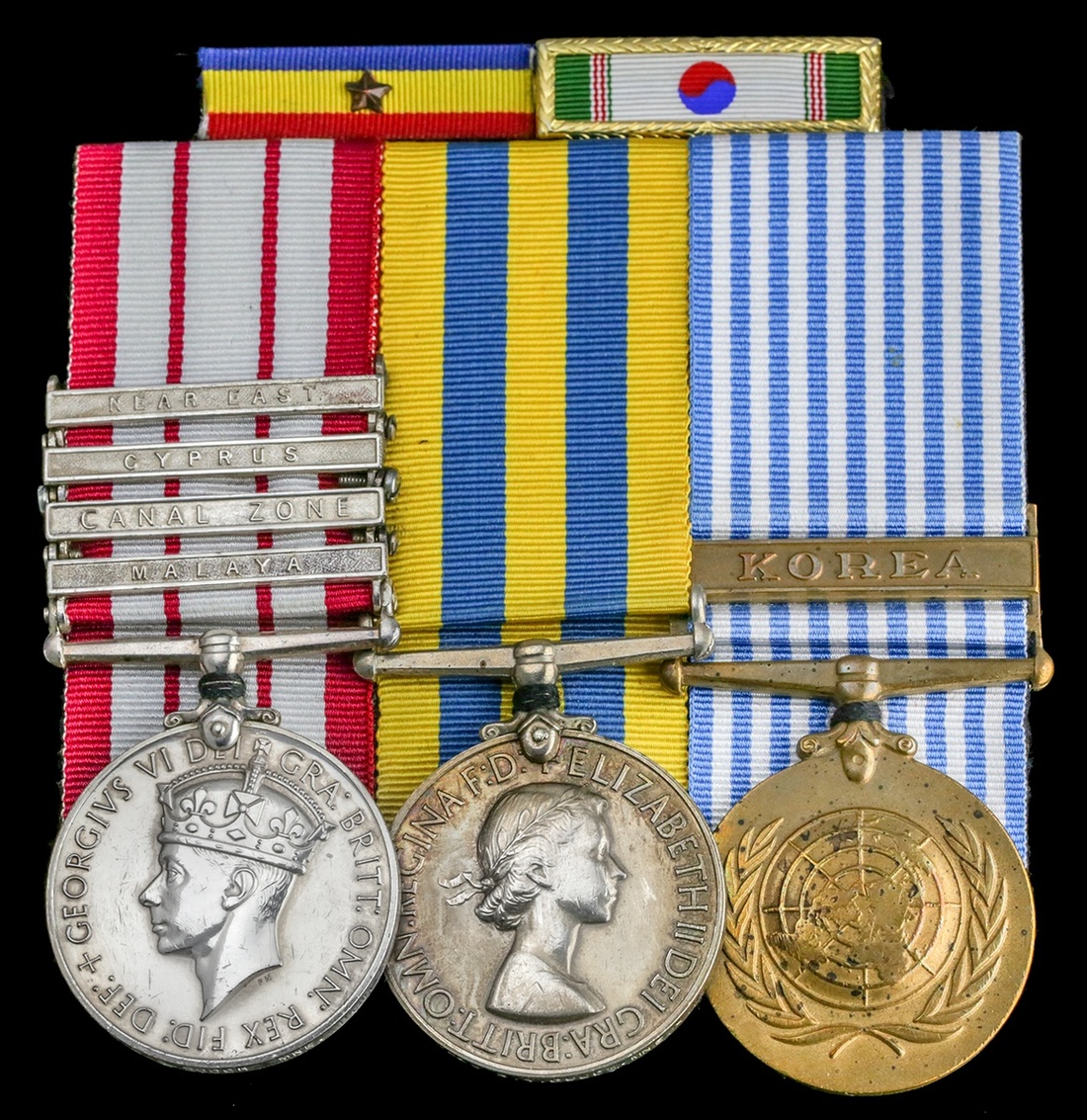 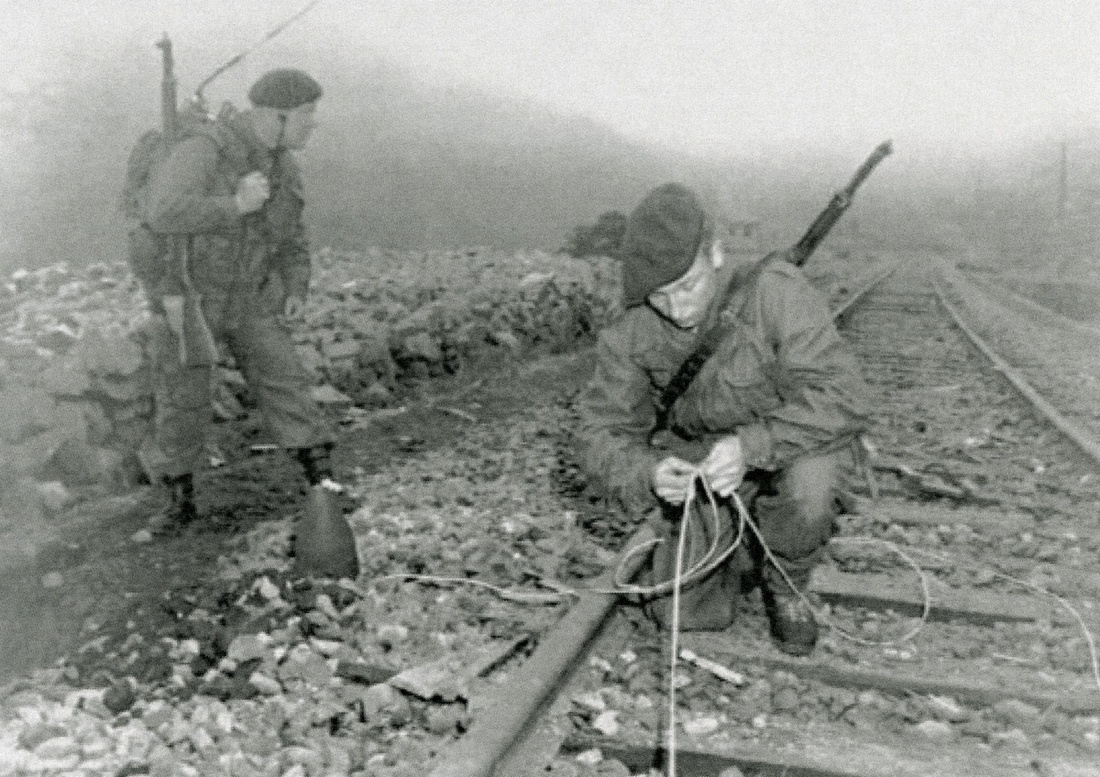 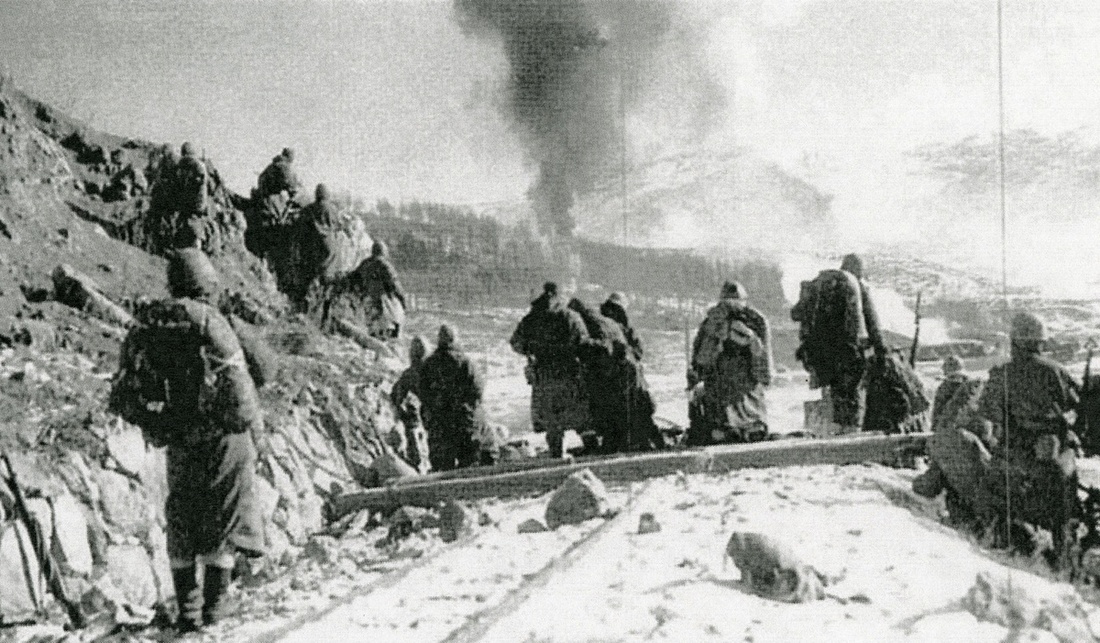 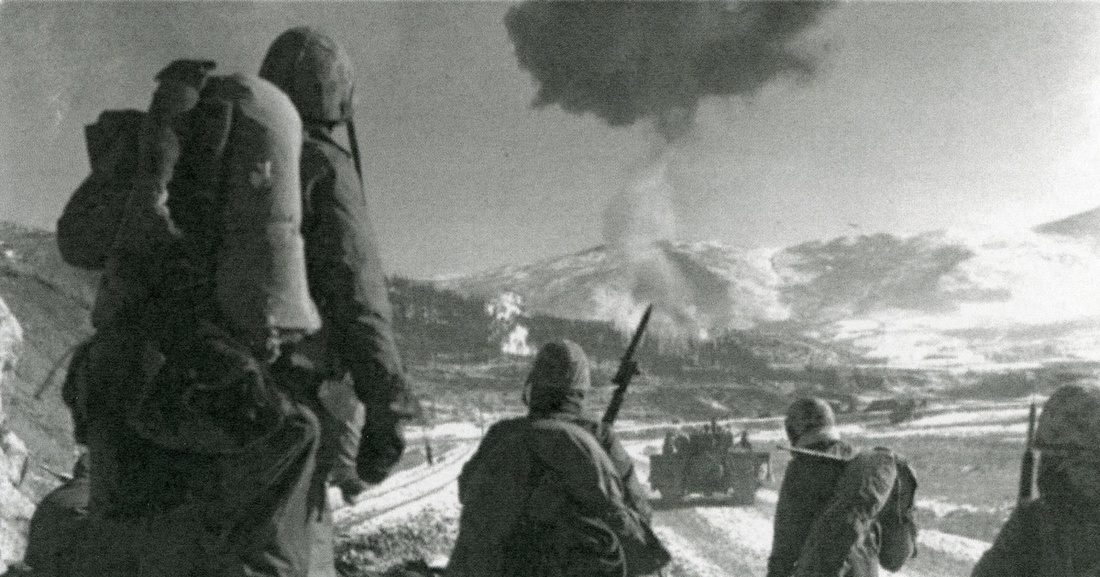 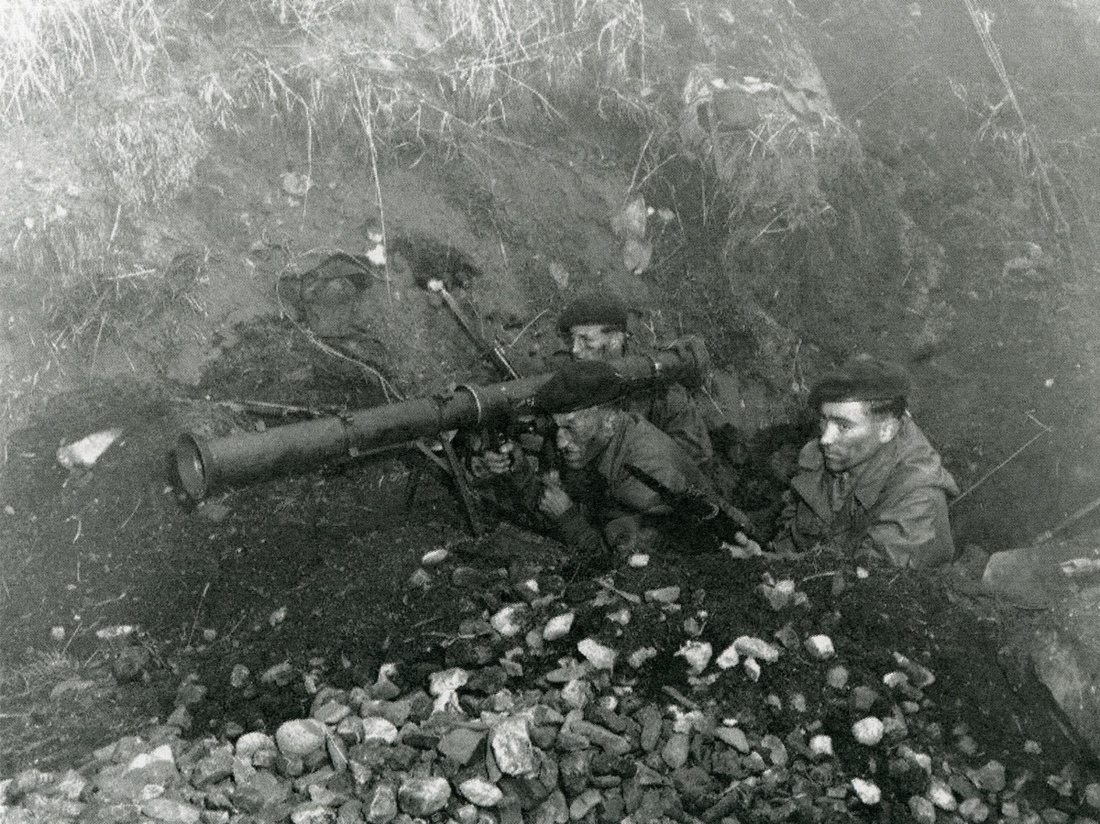