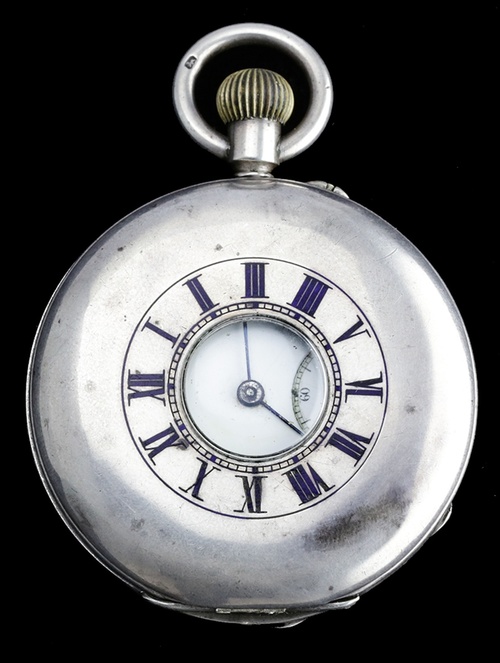 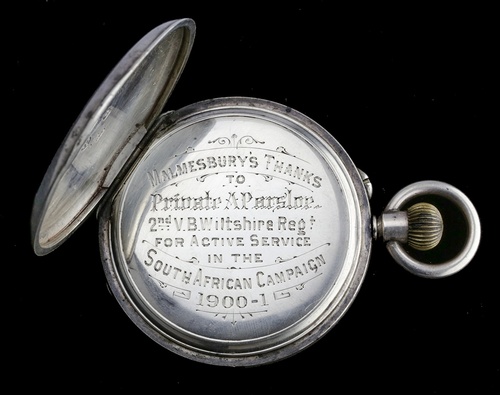 A Boer War tribute pocket watch from the citizens of Malmesbury, Wiltshire
silver, hallmarks for Chester 1900, inside of case engraved, 'Malmesbury's Thanks to Private A. Parsloe, 2nd V.B. Wiltshire Regt. For Active Service in the South African Campaign 1900-1', the front of the case detached, otherwise generally in good condition

'PRESENTATION TO VOLUNTEERS AT MALMESBURY

There was a special parade of the A Company 2nd Volunteer Battalion Wiltshire Regiment, in the Market Square, Cross Hayes, Malmesbury, on Thursday night, for the purpose of presenting the lately returned from South Africa with a silver watch each. There was a full muster of men under the command of Captain S. E. Doswell, and they marched to the strains of their fife and drum band through High Street into the square, where a platform had been erected, and on which were the Mayor and Mayoress (Mr and Mrs H. Farrant), members of the town council, and many ladies and gentlemen of the town. The men were drawn up in a square, the returned volunteers in the centre. Captain Doswell, on behalf of the corps, presented the Mayoress with a splendid bouquet. His WORSHIP then addressed the men, who had been some of the first to volunteer for the front, and had turned out in larger numbers than in most towns of the size. He spoke of the hardships they had cheerfully endured. It had been thought by the committee that a good English-made silver watch, with a suitable inscription, would be a slight memento of the event. Corporal E. F. Edwards was the first recipient, and in a manly speech he returned thanks on behalf of himself and his comrades, Lance-Corporal V. H. Hobbs, Privates J. Matthews, A. Parsloe, F. Elliott, H. G. March, W. Johnson, E. Thornbury, C. H. Blackford, F. Paginton, H. Shinglee, W. Wakefield, A. H. Stevens and A. W. Stevens. These, all but the last three, received the watches. The other watches will be sent to the men. Mr. H. GARLICK, ex-Mayor, spoke a few words of encouragement to the men as an old Volunteer before some of them were born. Captain DOSWELL, in a patriotic speech, thanked the Mayor and Corporation for the honour done to the men, and thanked the Mayoress for her kindness in making the presentation. He strongly urged every young man to join the volunteer force for his own as well as country's benefit. The men were cheered most heartily as each cane forward to receive his present. The Malmesbury Brass Band played a selection of music. The watches were silver English keyless half-hunter levers. Each watch was enclosed in a shut-up case in morocco, velvet lined, and on the back of each was engraved:-"Malmesbury's thanks to (recipient's name) 2nd V. B. Wilts Regiment for active service in the South African campaign, 1901." ' 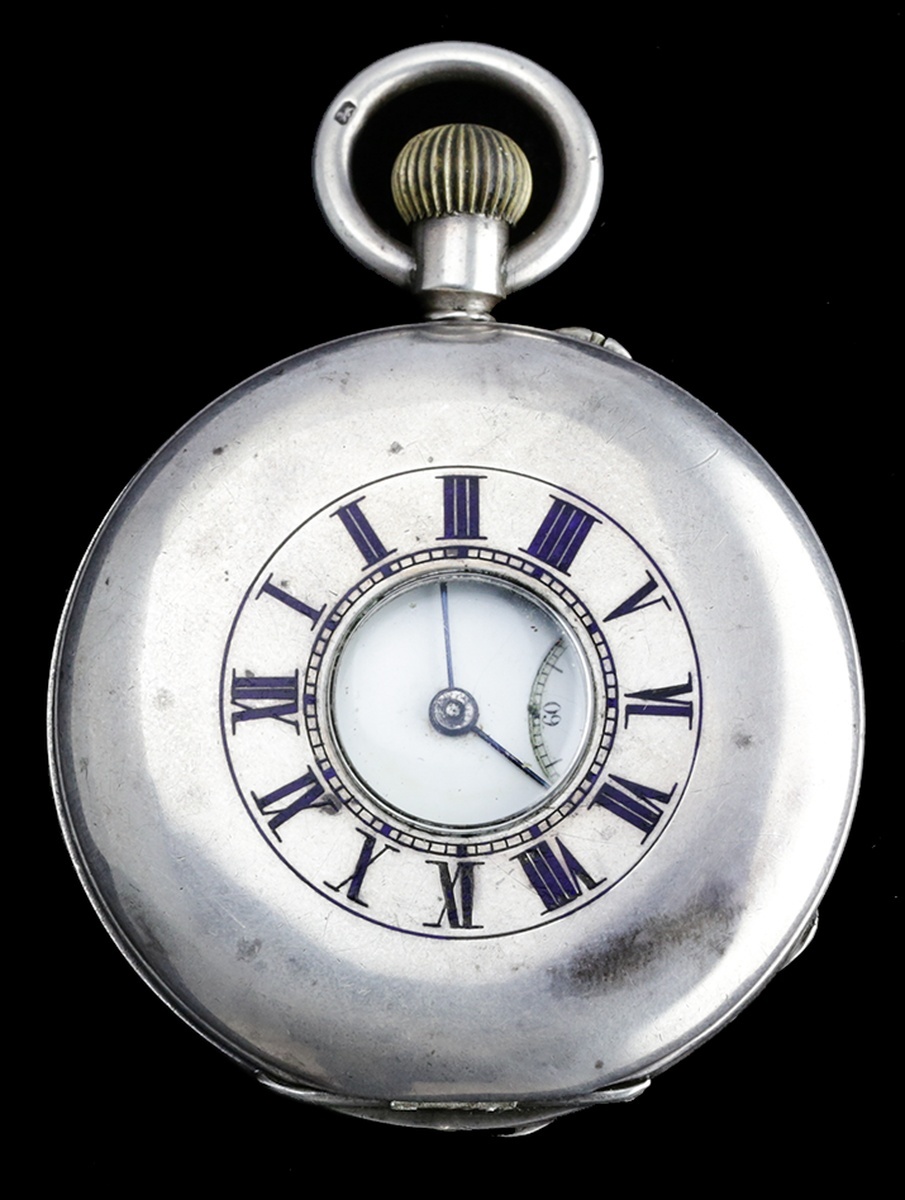 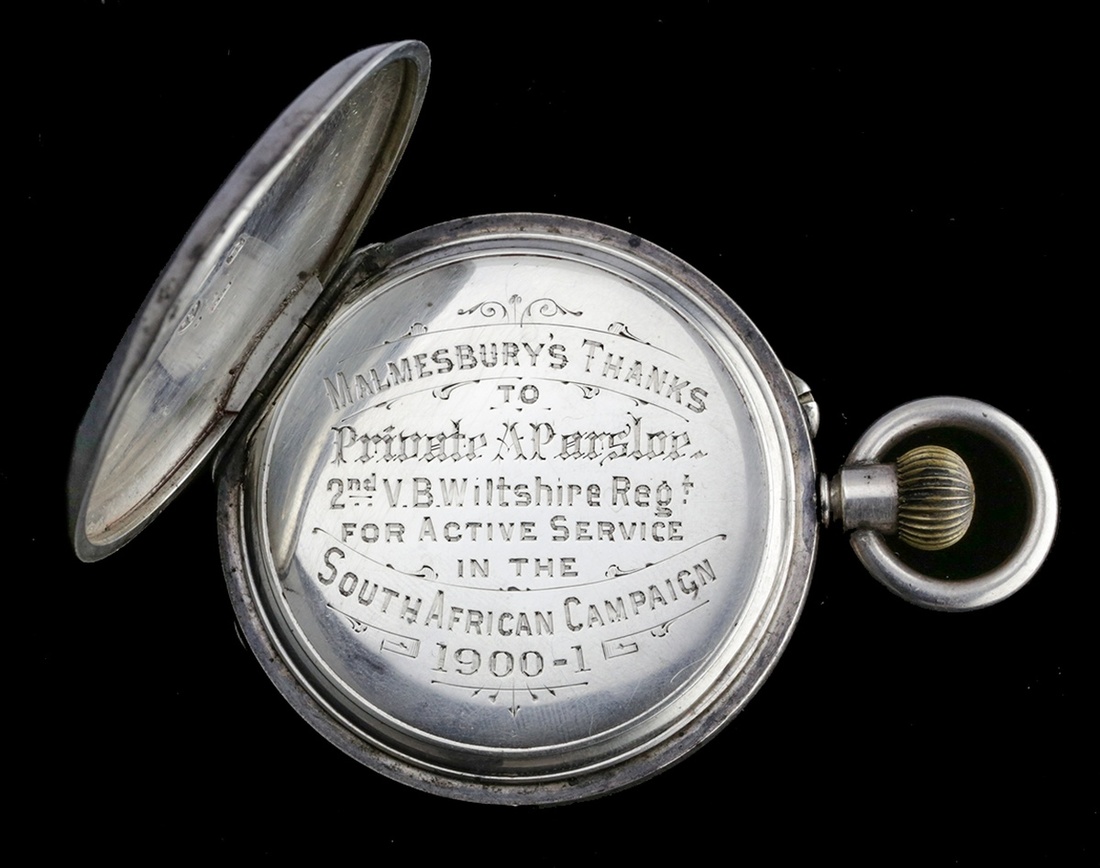