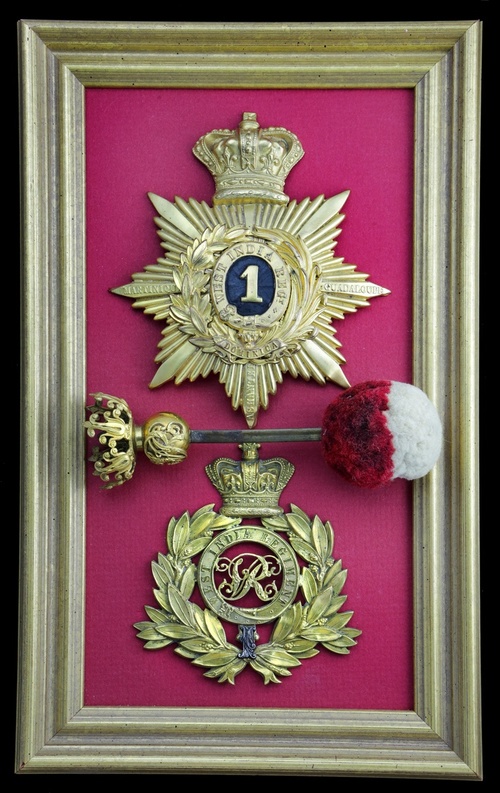 The 1861-69 star-plate in gilt metal, 85mm x 69mm, the strap-and-buckle bearing the title WEST INDIA REGT. and enclosing the numeral 1 upon a domed gilt ground. Some distortion to the (wearer’s) left-hand point and the reverse lugs bent but generally good condition, retaining all gilt.

The 1869-78 laurel-wreath plate in gilt metal, 95mm x 87mm, with an applied silver numeral 1 superimposed upon the tail of the strap-and-buckle which bears the title WEST INDIA REGIMENT. Apparently very good condition and retaining all gilt but, being mounted within a frame, no sight is possible of the reverse fittings. The ball-tuft in red-over-white wool, 45mm x 40mm, together with its integral copper 85mm spike; the tuft-holder in gilt metal, 40mm x 38mm, the ball mounted with the Royal Cypher VR; some distortion of the holder’s cage but otherwise good condition and retaining all gilt.

The Universal Pattern helmet star-plate in gilt metal, 122mm x 106mm, bearing the battle honours MARTINIQUE, GUADELOUPE and ASHANTEE on the left, right and bottom points; the plate mounted with a wreath of (wearer’s right) laurel and (left) palm, with a scroll at the wreath’s conjunction bearing the battle honour DOMINICA, within which is a strap-and-buckle bearing the title WEST INDIA REGT. enclosing the gilt numeral 1 upon a black patent leather ground. Apparently good condition, with some slight distortion to the bottom two diagonal points of the star, and retaining all gilt; the patent leather centre worn; being mounted within a frame, no sight is possible of the reverse fittings.

The 1869-78 pattern shako plate, with its tuft and tuft-holder, and 1878-1902 pattern helmet plate all fixed upon a scarlet ground within an unglazed gilt frame 290mm x 176mm. Details of the officer to whom original ownership of those two badges is ascribed, together with some details of the two badges’ provenance, are contained in a typed sheet (with later Mss. additions) affixed to the reverse of the frame (Lot)

Arthur was commissioned Sub-Lieutenant in 1st West India Regiment in May 1874 and promoted Lieutenant two years later. Between 1880 and 1882 he was Fort Adjutant at Cape Coast Castle in the Gold Coast; he was promoted Captain in March 1882.

In May 1883, he exchanged to 1st Battalion, The Devonshire Regiment, then stationed in Dublin. He was promoted Major in November 1892, by which time the Battalion had moved to Alexandria, in Egypt, but had been warned for posting to India in 1893. The Battalion served on the North-West Frontier 1897-98 as part of the Tirah Field Force and Spratt subsequently received the India Medal 1895-1902, with clasps ‘Punjab Frontier 1897-98’ and ‘Tirah 1897-98’, having been present at the capture of the Sampagha and Arhangha passes.

He next served as Second-in-Command of the 2nd Battalion during the 2nd South African War, subsequently receiving the Queen’s South Africa Medal 1899-1902 with four clasps. He retired in May 1902 and went to live in the village of Brampford Speke in Devon.

On the outbreak of the First World War, he briefly commanded the 3rd/4th (subsequently the 4th Reserve) Bn. of his regiment but was retired with the honorary rank of Lieutenant-Colonel in March 1916; he does not appear to have qualified for, or claimed, any First World War campaign medals. He died, unmarried, in Brampford Speke in March 1939 and was buried in the parish churchyard. 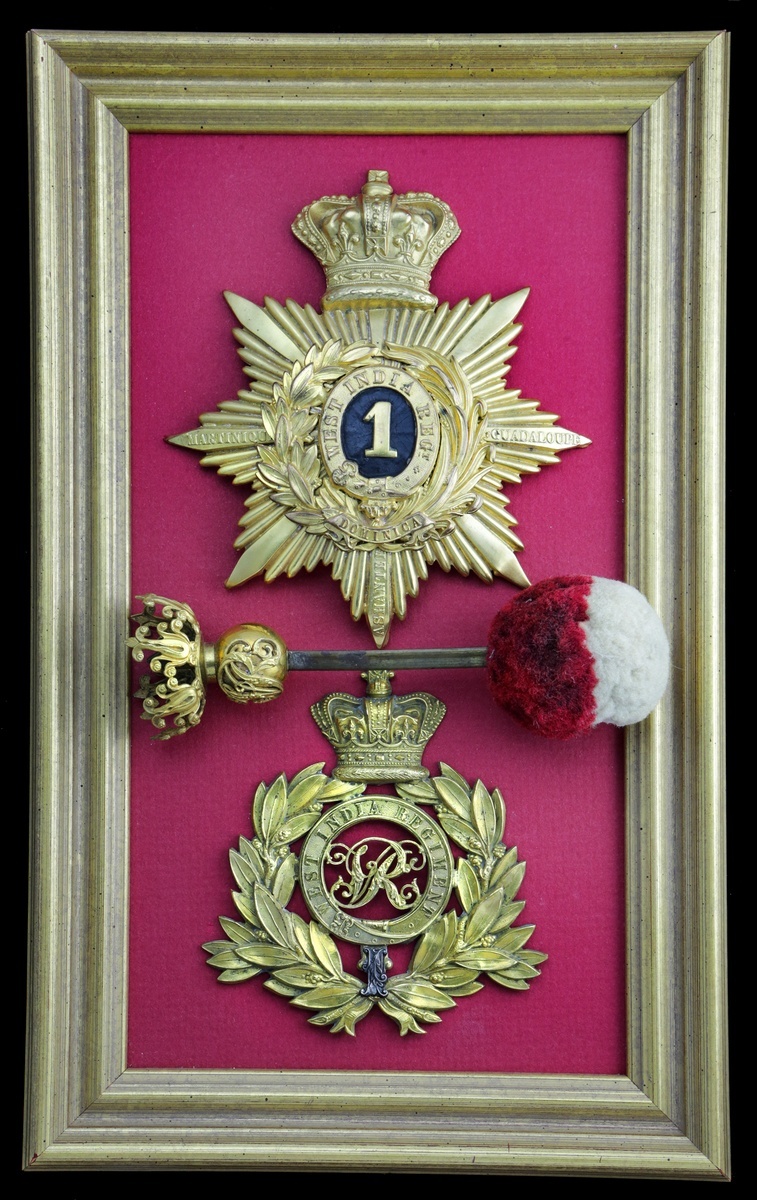