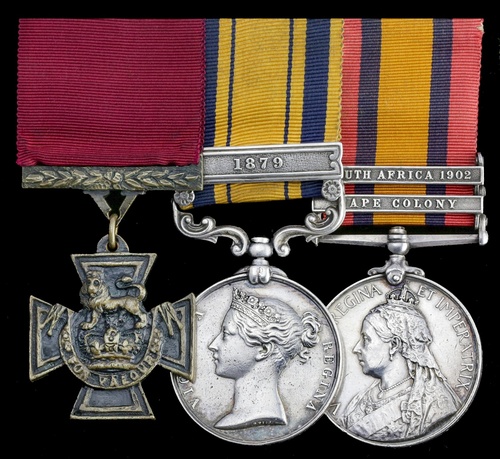 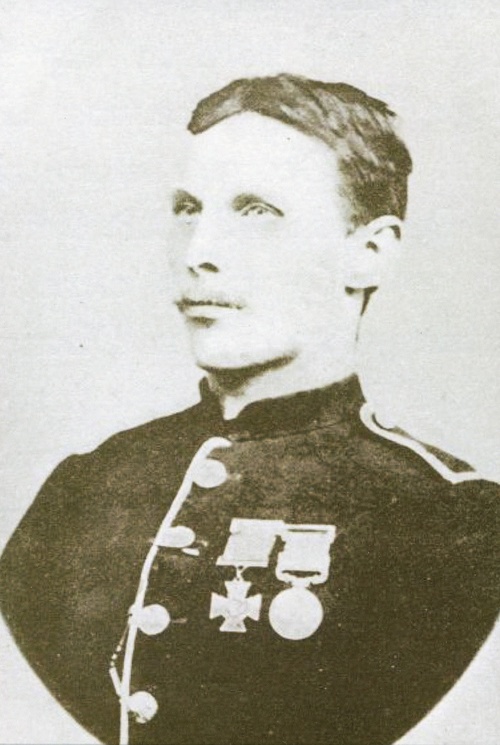 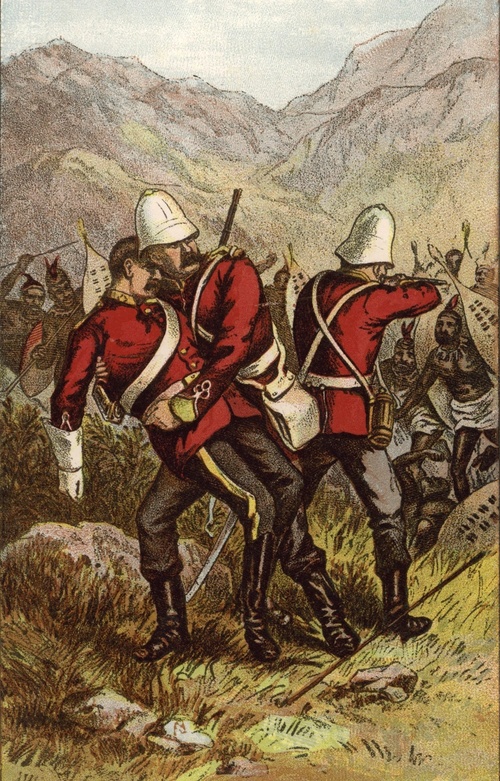 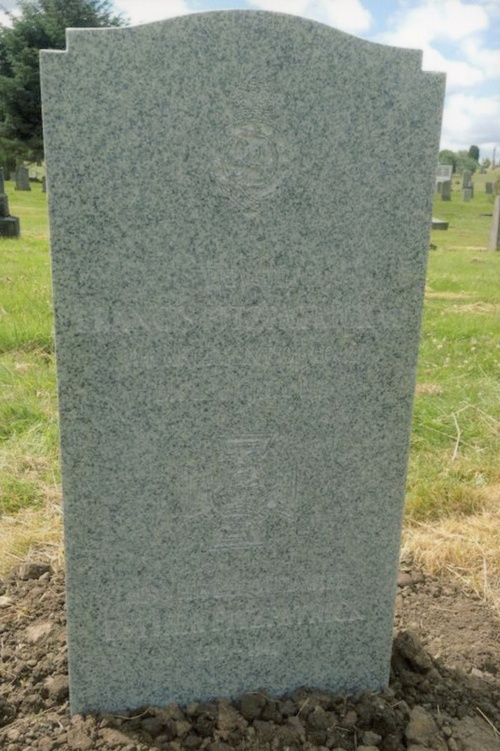 The Basutoland 1879 operations replica V.C. group worn by Private F. Fitzpatrick, Argyll & Sutherland Highlanders, late 94th Regiment and Connaught Rangers, including his original Queen's South Africa Medal: according to his great-niece - who was charged with polishing his medals - he wore these very same awards during the course of his civilian employment as a G.P.O. doorkeeper in Glasgow

Decorated for his gallant part in rescuing a wounded officer in the attack on Sekukini's Town on 28 November 1879, he was himself seriously wounded - and taken prisoner - at Bronkhurst Spruit in the First Anglo-Boer War in 1881, the same occasion on which his original V.C. was lost: that Cross was subsequently recovered and returned to the War Office but, as related by M. J. Crook in the Evolution of the Victoria Cross, Fitzpatrick had already been issued with an official replacement and 'no attempt was made to exchange this' for the original

Falling on hard times in Malta after taking his discharge in 1888, Fitzpatrick sold his V.C. and South Africa Medal, clasp 1879, and they next appeared in the famous Jourdain Collection in 1906. Here then, following further active service in the Boer War, tangible evidence of his replica V.C. having been worn with pride over many years

'The [Fitzpatrick's] V.C. was lost in action against the Boers at Bronker's Spruit, for which reason it was replaced in June 1881 at public expense. Oddly enough, the original Cross was subsequently found, being returned to the War Office in August 1881, but it appears that no attempt was made to exchange this for the replacement Cross then in Fitzpatrick's possession.'

A Victoria Cross and South Africa Medal, clasp 1879, purchased by Lieutenant-Colonel H. F. N. Jourdain at Sotheby's for £42 in 1906, today reside in the collection of the National Army Museum, Chelsea, London.

The replica V.C. and South Africa Medal, clasp, 1879, and original Boer War Medal, as described above, were worn by Fitzpatrick from the early 1900s up until his death in 1933, when he bequeathed them to the first member of his family to serve in the armed forces. Some confusion reigns as to who that was - probably a great nephew - but more certain is the fact that they were sold to a dealer, Joseph Kavanagh of Smithfield, Belfast, in November 1950.

He, in turn, sold them to Alderman Malcolm Mercer, who loaned them to the Belfast Museum. Resultant newspaper reports reached Lieutenant-Colonel Jourdain, who argued that the awards in question - excluding the Queen's South Africa Medal - were replicas. The Alderman, having obtained a professional opinion as to authenticity, was disappointed to learn that the Colonel's suspicions were correct. As a consequence, he withdrew the awards from the Belfast Museum and obtained a refund from Mr. Kavanagh.

'In recognition of their gallant conduct during the attack on Sekukini's Town on 28 November last, in carrying out of action Lieutenant Dewar, 1st Dragoon Guards, when badly wounded. At the time when he received his wound, Lieutenant Dewar had with him only Private Flawn and Fitzpatrick, and six of the Native Contingent, and, being incapable of moving without assistance, the natives proceeded to carry him down the hill, when about 30 of the enemy appeared in pursuit about 40 yards in the rear, whereupon the men of the Native Contingent deserted Lieutenant Dewar, who must have been killed but for the devoted gallantry of Privates Flawn and Fitzpatrick, who carried him alternately, one covering the retreat and firing on the enemy.'

Francis Fitzpatrick was born at Clontibret, Co. Monaghan, Ireland in 1859, the son of James and Margaret Fitzpatrick, and enlisted in the 94th Regiment at Newry in 1876.

Embarked for South Africa, and following the end of the Zulu War, he was actively engaged in the operations of the Basuto War in November-December 1879 and, as cited above, was awarded the V.C. for his gallant rescue of Lieutenant Dewar of the 1st Dragoon Guards in the attack on Sekukini's Town. The Basuto Chief's stronghold was considered impregnable, but his warriors faced formidable odds, Sir Garnet Wolseley having assembled a sizeable force of Imperial and Colonial troops. Aside from the regulars of the 21st, 80th and 94th Regiments, Sekukini was up against 800 Colonial troops and several thousand native levies. At 6 a.m. on 28 November 1879, Wolseley launched a three-pronged attack, with Fitzpatrick and the 94th taking the centre:

'The infantrymen with fixed bayonets charged. Thousands of knees pounding in unison had the sound of a roaring surf. It seemed in harmony with the fusillades, the screams and yells, and the skirls of pipers - the very breath of the battle. The pipers stood at the foot of the hill beating the ground with their feet while playing with fiendish energy … '

It took three hours - at a cost of British casualties of 13 killed and 35 wounded - for the stronghold to be overrun.

Both Fitzpatrick and Flawn were presented with their V.C.s by Lieutenant-Colonel Philip Anstruther, commanding the 94th Regiment, at Lydenburg in the Transvaal on 17 September 1880.

Both, too, went on to see action at Bronkhurst Spruit in the First Anglo-Boer War in 1881, where they were taken prisoner. Fitzpatrick was wounded and left for dead and, it is said, had his V.C. taken by another soldier on the same occasion. He was issued with an official replacement in June 1881, about the time the 94th Regiment was re-mustered as the 2nd Battalion of the Connaught Rangers.

Fitzpatrick, who returned to England in 1882, subsequently transferred to the Duke of Cornwall's Light Infantry and was discharged in May 1888. At the outbreak of the Second Anglo-Boer War, after he is said to have fallen on hard times working as a groom in Malta, he enlisted in the 3rd Battalion, Argyll & Sutherland Highlanders, and saw further active service in Cape Colony (Medal & 2 clasps).

Fitzpatrick, who had married Esther (nee Breen), a Glasgow girl, settled in the city on taking his discharge in 1902 and found employment as a Post Office doorkeeper. He died at 49 Blysthwood Street, Glasgow on 13 July 1933, aged 74 years, and was buried in an unmarked grave at Kentigern's Cemetery. 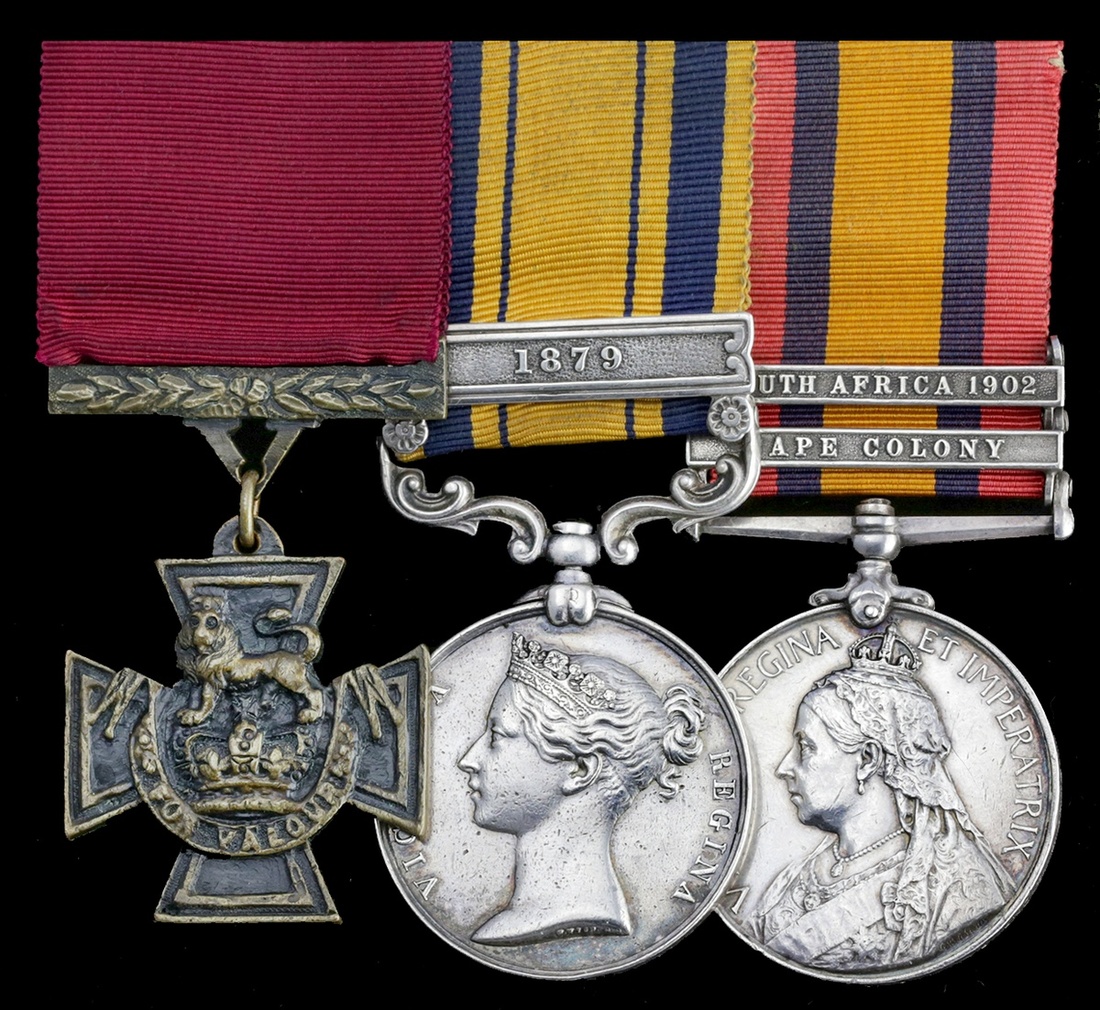 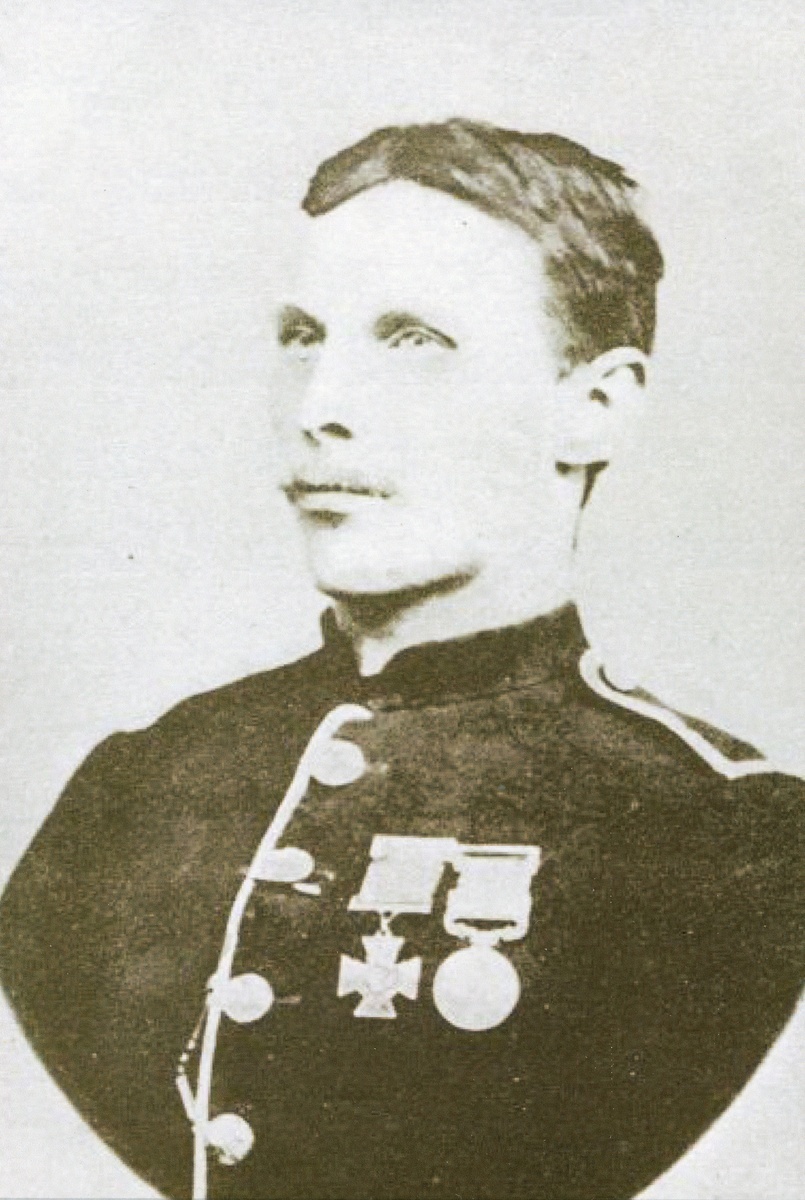 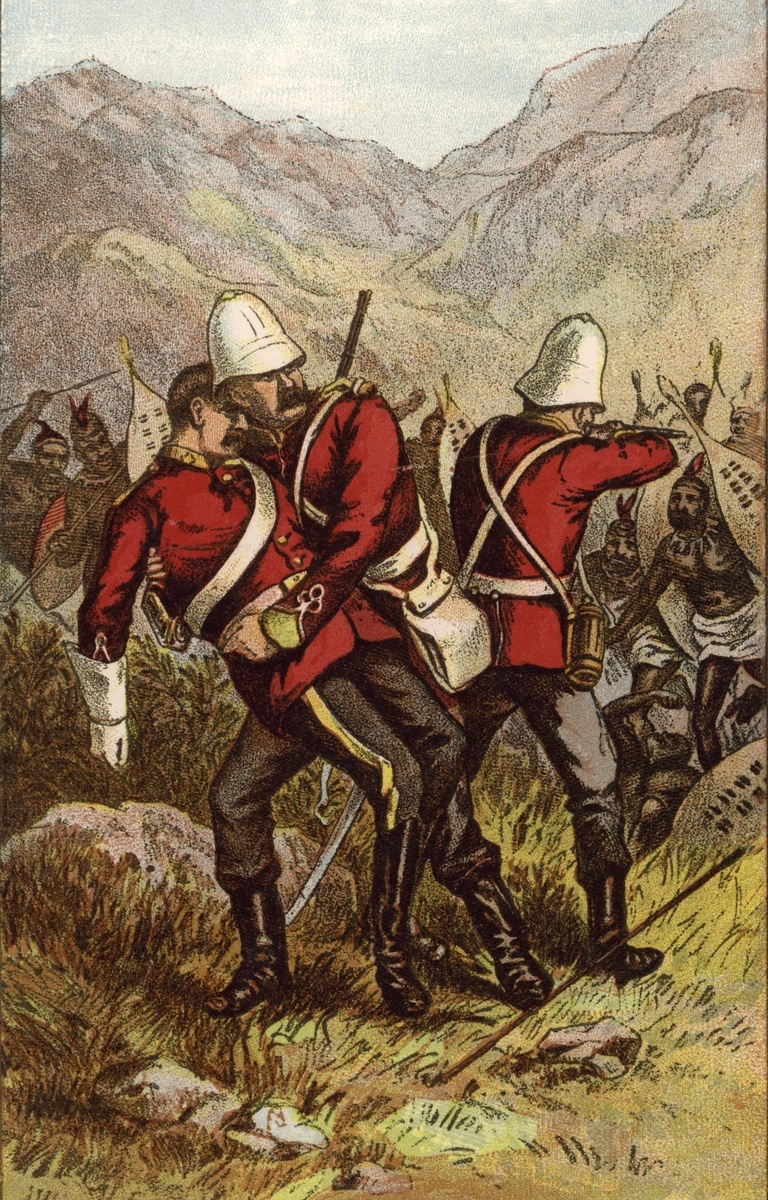 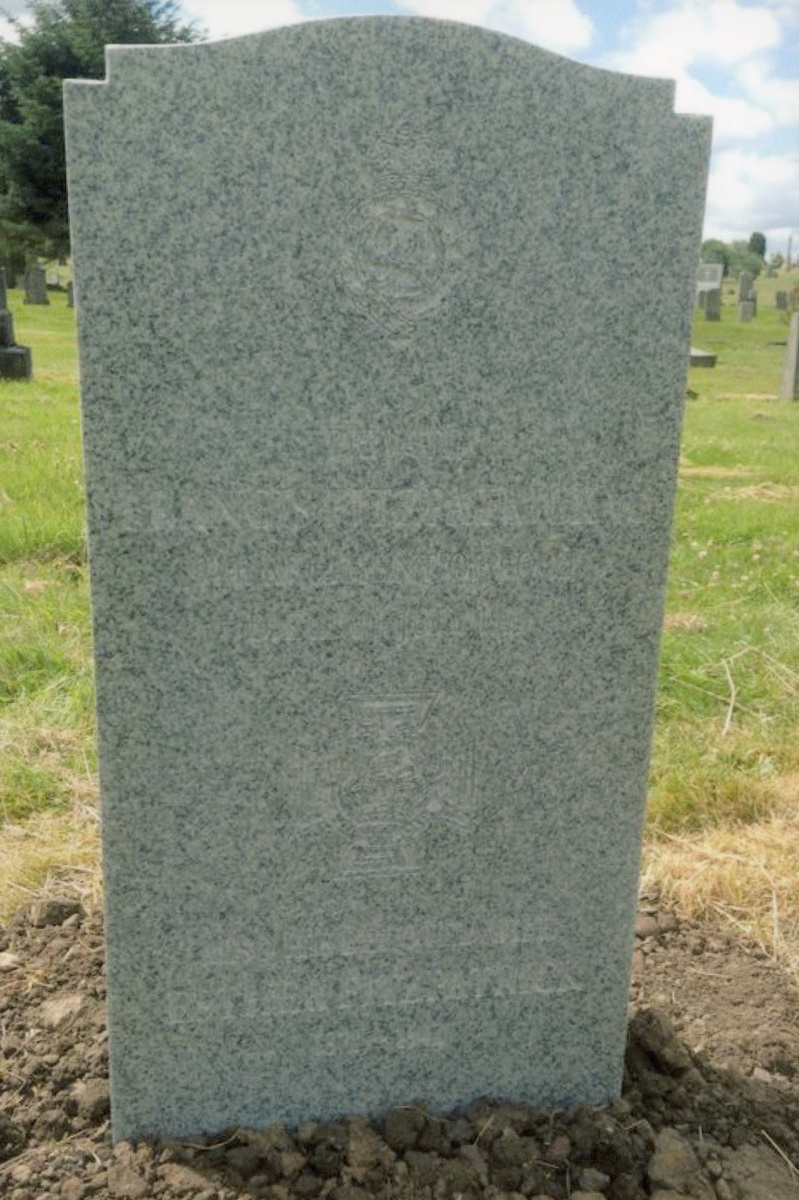