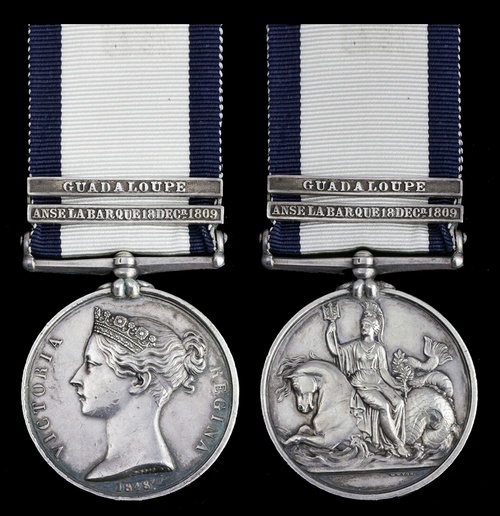 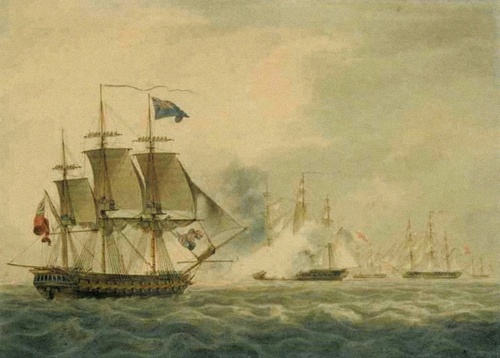 The rare and outstanding Naval General Service Medal awarded to Captain W. H. Baker, Royal Navy, who was entered on the ship's book of H.M.S. Bristol at the tender age of 10 years

This being an age when there were 'bishops in bibs and Colonels in short frocks', he kept the Navy's end up by first going into action as a 12-year-old Midshipman at Anse La Barque in December 1809. He then shared in some memorable actions off America, being present at the blockade of Boston and at the capture of the President

William Henry Baker was born in 1796 and entered the Royal Navy aboard Bristol in August 1806. Young Baker would join Proserpine in October 1807 in order to escort Lord Leveson-Gower, British Ambassador at St. Petersburg, home from Gothenburg.

In December 1808 Baker was lucky '...after having nearly been lost during an attachment of a few months to Cygnet' (O'Byrne, refers). Made Midshipman aboard Sceptre in early 1809, he witnessed the fall of Flushing before moving to the West Indies. Sceptre sailed to the Leeward Islands under command of Captain S. J. Ballard, who insisted on training his men in the use of the broadsword. It proved to be a timley decision.

Ballard and Sceptre arrived off Martinique with Alfred and Freya also in attendance and found four French frigates had captured and burnt the Halifax-based Junon off Guadaloupe. Sceptre would later join in the attack of two French flûtes, Loire and Seine anchored in Barque Cove, about nine miles to the northwest of the town of Basse-Terre. The French were forced to abandon their ships and set them alight. The second action of Sceptre would require the men to make use of their swords in order to capture Guadaloupe. While other troops were landed on the island, Ballard created a diversion off Trois-Rivières before landing Bluejackets and marines between Anse à la Barque and Basse-Terre.

Having served aboard Montagu, Stirling Castle and Venerable, Baker would be with Majestic for the blockade of Boston, whilst Constitution was waiting to go to sea. During the Autumn of 1813, she would also capture Euphema and Jerusalem in the Bay of Boston before being present for the capture of Constitution. The action was not yet over, for she would capture the French frigate Terpsichore, 44 guns and 320 men after a running fight of over two hours in February 1814. This classic chase is immortalised in the watercolour by Tobin & Anderson, held in the collection of the National Maritime Museum, Greenwich (PAH4081). Baker would also see the capture of President whilst in company with Endymion, January 1815. Majestic remained in service on the Coastal Blockade from 1823-27.

Returned home for service with H.M. Coastguard at Fort Moncreiff, Baker would receive the National Lifeboat Association's Silver Medal for gallantry in lifesaving during a dreadful gale in coming to the assistance of the stricken Bristol, off Dymchurch, Kent during November 1835. Advanced Commander of the Ranger from November 1839-January 1845, he was promoted Captain on retirement in August 1860. In receipt of an annual pension from March 1868, Baker died in December 1879; sold with copied research 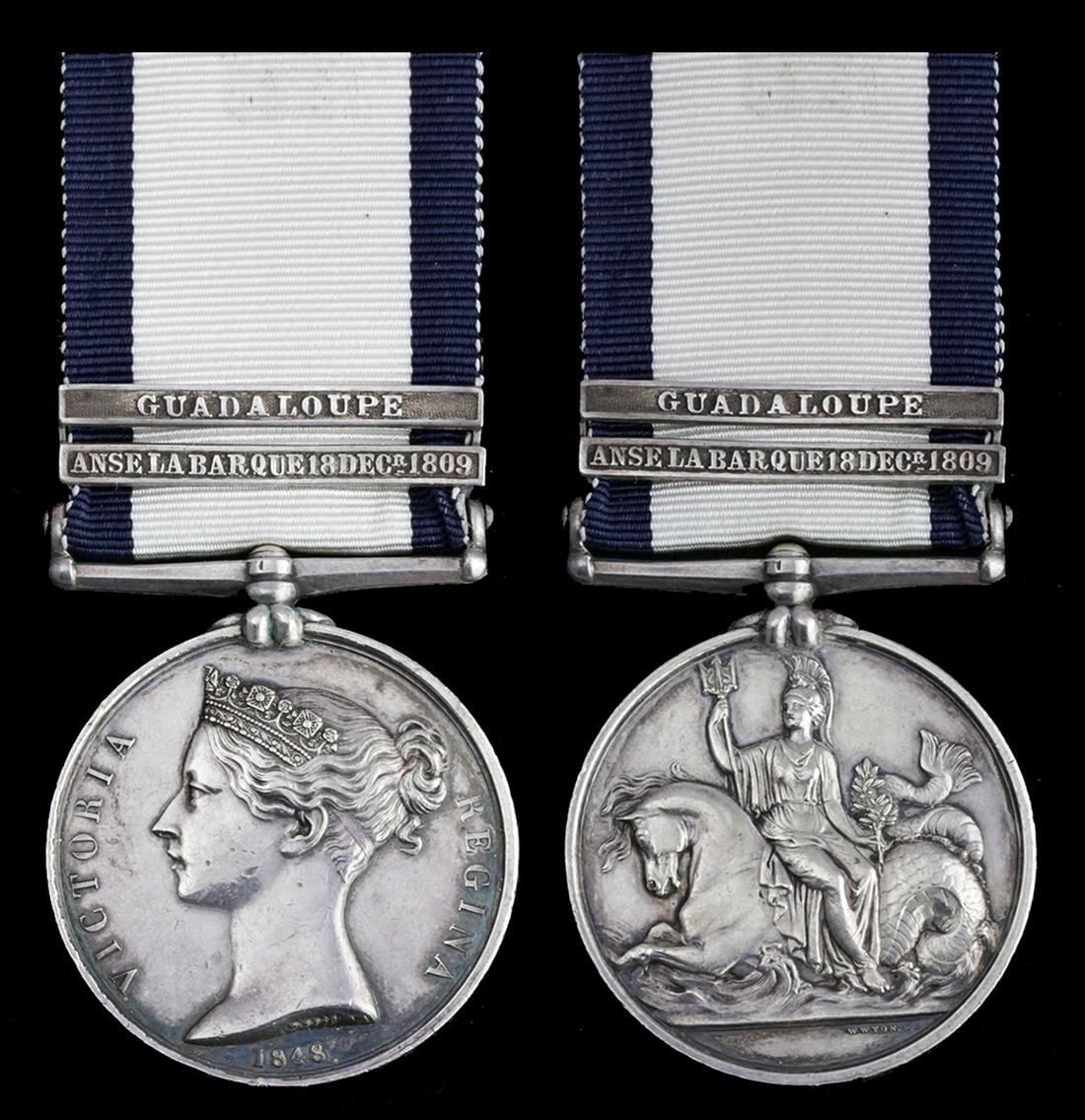 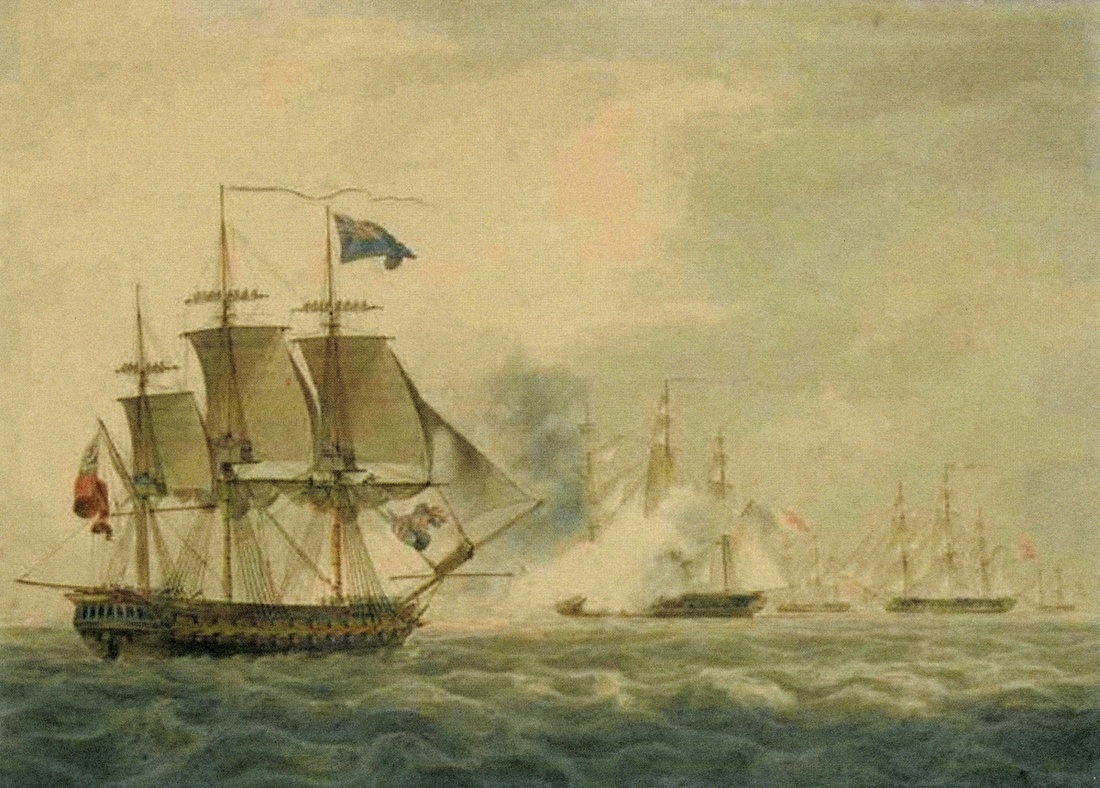