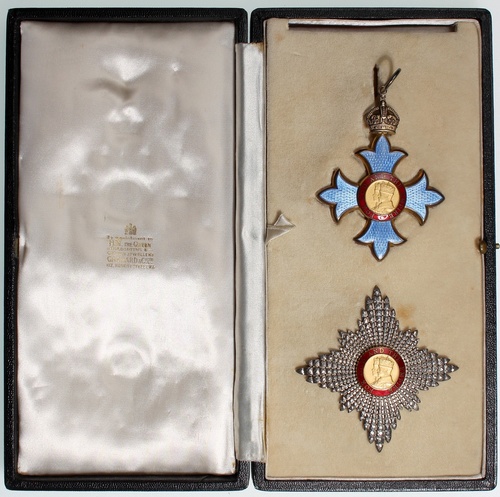 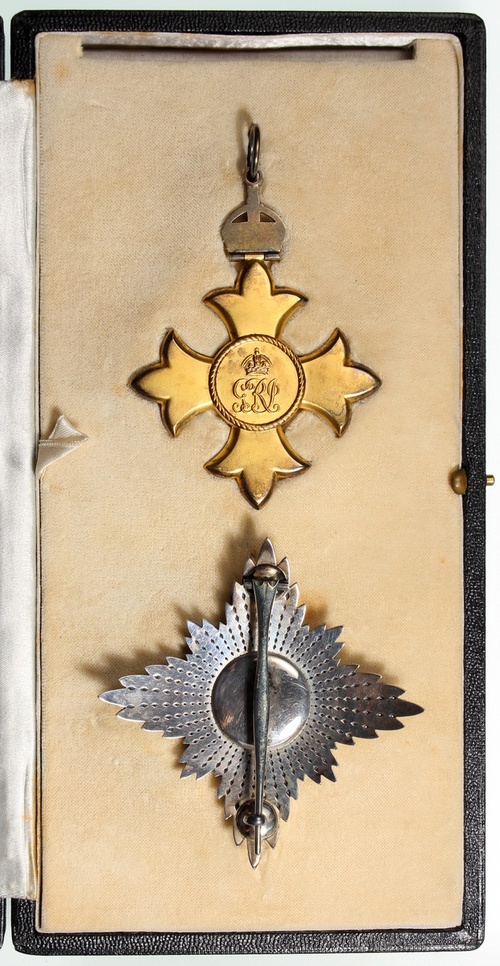 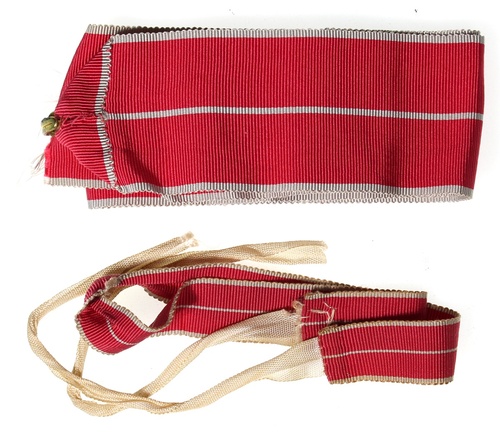 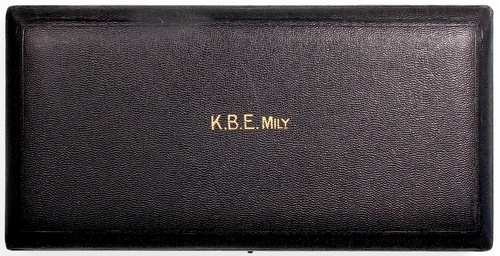 Great Britain, one set containing a pair of medals. The set offered here is an original example of The Order of the British Empire, (K.B.E.), Military, type 2, in original case of issue as awarded to Air Marshal Sir E.M.F. Grundy, Royal Air Force whose distinguished career saw him take a role in the ‘Battle of the Beams’, become Chief Signals Officer of SHAPE and Senior Air Staff Officer for the British Joint Services Mission to Washington.

Large silver-gilt and pale blue enamel cross patonce on hinged Tudor crown suspension; the face with a circular central silver-gilt medallion imposed with the crowned head and shoulders portraits of King George V and Queen Mary facing left within a red enamel ring inscribed ‘FOR GOD AND THE EMPIRE’; the reverse with a circular central medallion with the crowned cipher of King and Emperor George V within a rope border; diameter 63.89mm (2.51 inches); on original full neck ribbon with hook and eye fitting. The large breast badge features King George V and Queen Mary, joint busts, crowned, in central roundel, all in silver gilt, surrounded by a band of crimson enamel bearing the motto inlaid in silver gilt; the whole in the centre of the chipped silver four-pointed star. The reverse showing a large tapered pin & hook, with silver domed reverse to centre, the badge measuring 80mm in diameter. Both pieces are housed in their Garrard & Co. gilt embossed award case.

This came from an auction of his medals and effects and comes with a copy of his service history.

The Order was instituted by King George V on 4 June 1917 in five grades to acknowledge the service of non-combatants during wartime. In 1918 the Order was divided into Civil and Military divisions. This example is of the second type. Prior to 1935, the Order has Britannia rather than King George V and Queen Mary on the face. A superb example.

Air Marshal Sir Edouard Michael Fitzfrederick Grundy was born on 29 September 1908 and was educated at St Paul’s School before entering the RAF College at Cranwell in 1926 as a Flight Cadet with ‘A’ Squadron. While studying here, he joined the College fencing team and was promoted Cadet Flight Sergeant. Graduated to the rank of Pilot Officer with No 56 Squadron at North Weald on 28 July 1928. Transferred to No. 403 flight, (Fleet Air Arm) on 2 May 1929, he was promoted Flying Officer on 28 January 1930. After falling ill Grundy was listed as Supernumerary and remained such from 26 September 1931-25 April 1932. Having completed a specialist course at the Electrical and Wireless School he took up a staff role at Biggin Hill.

Grundy took part in an exchange posting with the Royal New Zealand Air Force on 11 June 1937 and promoted Squadron Leader that same year on 1 October. Promoted to Temporary Wing Commander on 1 June 1940. Appointed C.O. of No. 80 (Signals) Squadron on 22 April 1942, this unit was formed two years earlier to deal with the threat of German Bombers being radar-guided to their targets. This led to the so called ‘Battle of the Beams’, an arms race between German radar and British countermeasures. Fortunately No. 80 Squadron were able to limit the damage of German night bombing raids. Promoted Temporary Group Captain on 1 September 1942 and Wing Commander on 23 October 1942, being confirmed in the rank the next year.

Posted to North-West Africa, Grundy took a position in Air Staff Headquarters on 1 March 1943, receiving a ‘mention’ for his work (London Gazette 2 June 1943). He later took on the role of Deputy Chief Signals Officer of the Mediterranean Allied Air Forces on 15 Jan 1944. However he did not remain in the role long moving to HQ Middle East Command 27 April 1944 and received his second ‘mention’ here (London Gazette 8 June 1944). Promoted Group Captain 4 September 1944. With the end of the war in 1945 Grundy was appointed Commandant of the Empire Radio School before moving to become Deputy Director of Air Staff Policy in 1947.

With the founding of NATO in 1949 Grundy became Air Advisor to the Royal Norwegian Air Force and helped with their post-war development, the RNoAF having acquired radar in 1947. Appointed Chief Signals Officer of the Supreme Headquarters Allied Powers Europe in 1951, promoted Air Commodore here on 1 January 1952. After studying at the Imperial Defence College 1953 he became Senior Air Staff Officer for the British Joint Services Mission to Washington. The next year Grundy was made Chairman of the NATO Military Agency for Standardisation, being promoted Air Vice Marshal while serving in this role on 1 January 1955. He continued in this role until becoming the Air Officer Admin for Headquarters Far East Air Force on 1 November 1958. Having left East Asia he was appointed Commandant-General of the RAF Regiment & Inspector of Ground Defence on 5 May 1961. Finally he became Controller in Guided Weapons and Electronics for the Ministry of Aviation on 1 June 1962; promoted Air Marshal on 1 July 1963.

Upon retiring from the Royal Air Force on 7 January 1966, Grundy joined Short Brothers and Harland as Chairman in 1968. This role saw him take on the Presidency of the Society of British Aerospace Engineers in 1975. He retired from business in 1976 and died on 15 June 1987.
Well preserved in the original hard cover case with ribbands.

Sale CSS69B Notices
Please see the revised description on Spink Live which is the most up to date description for the lot. 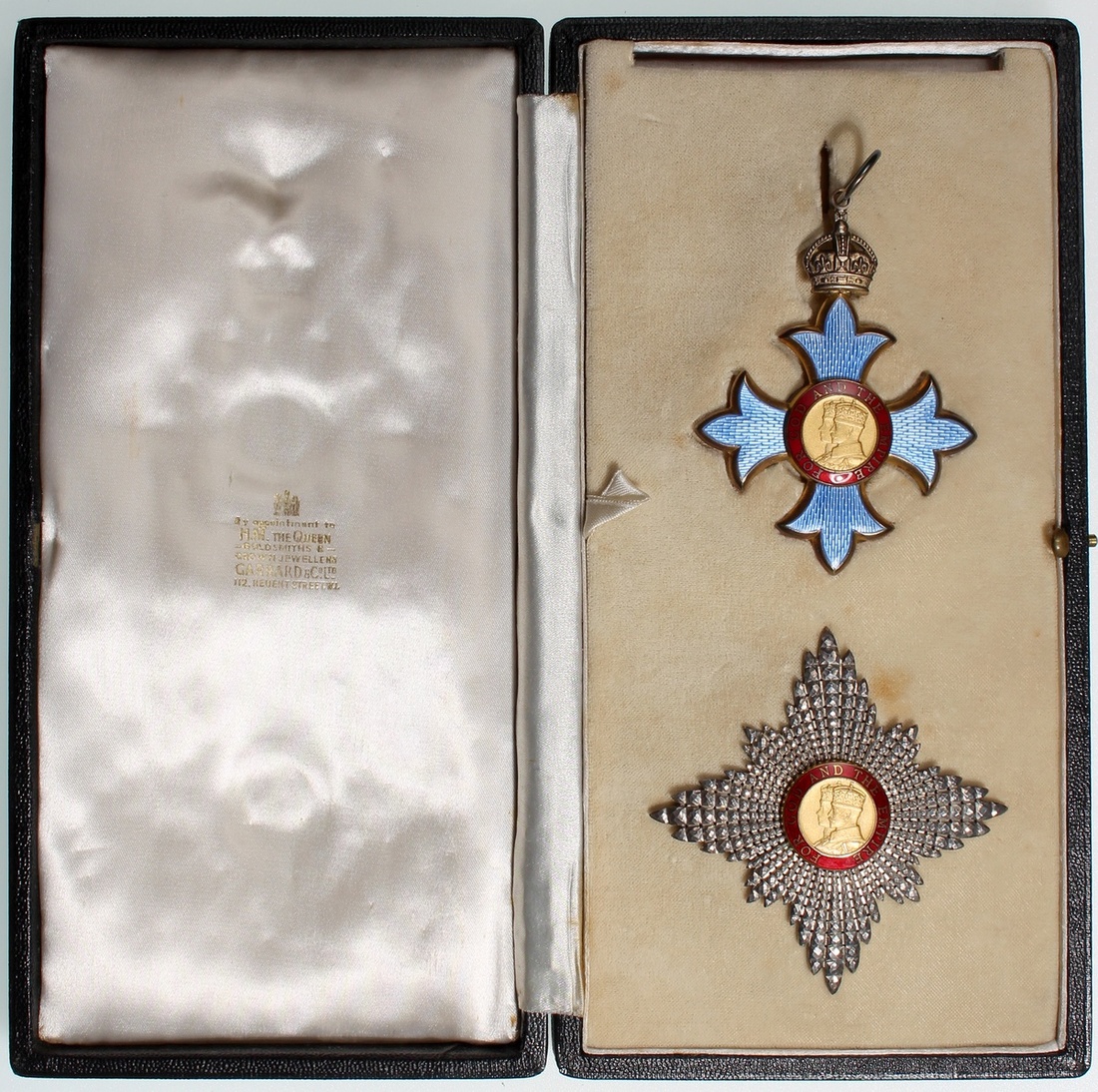 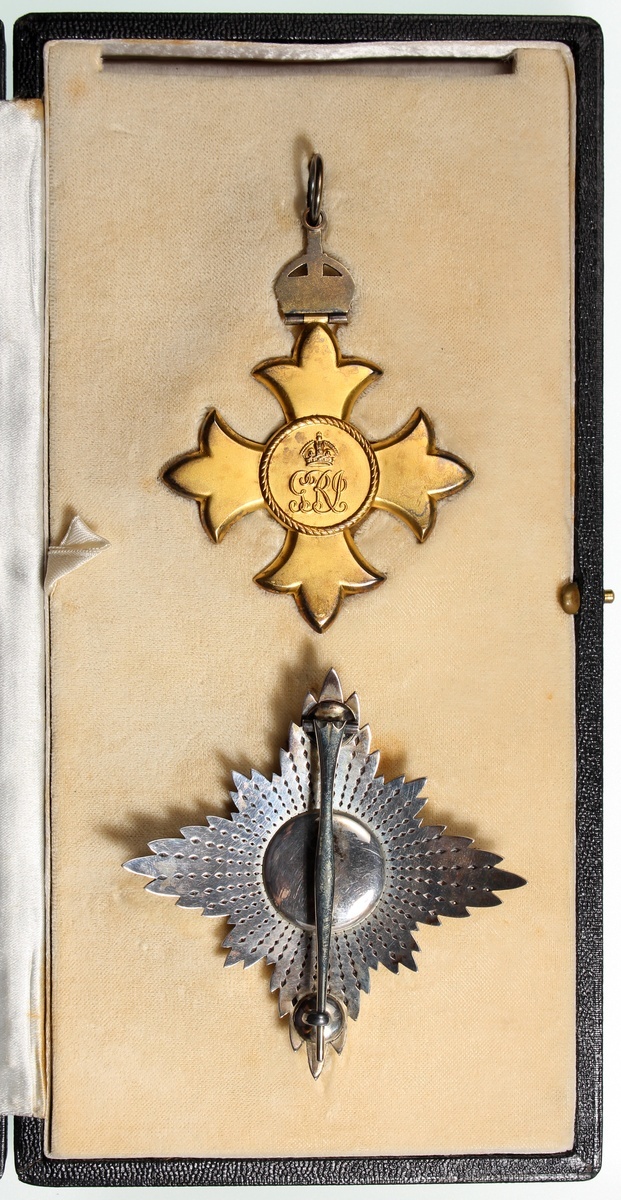 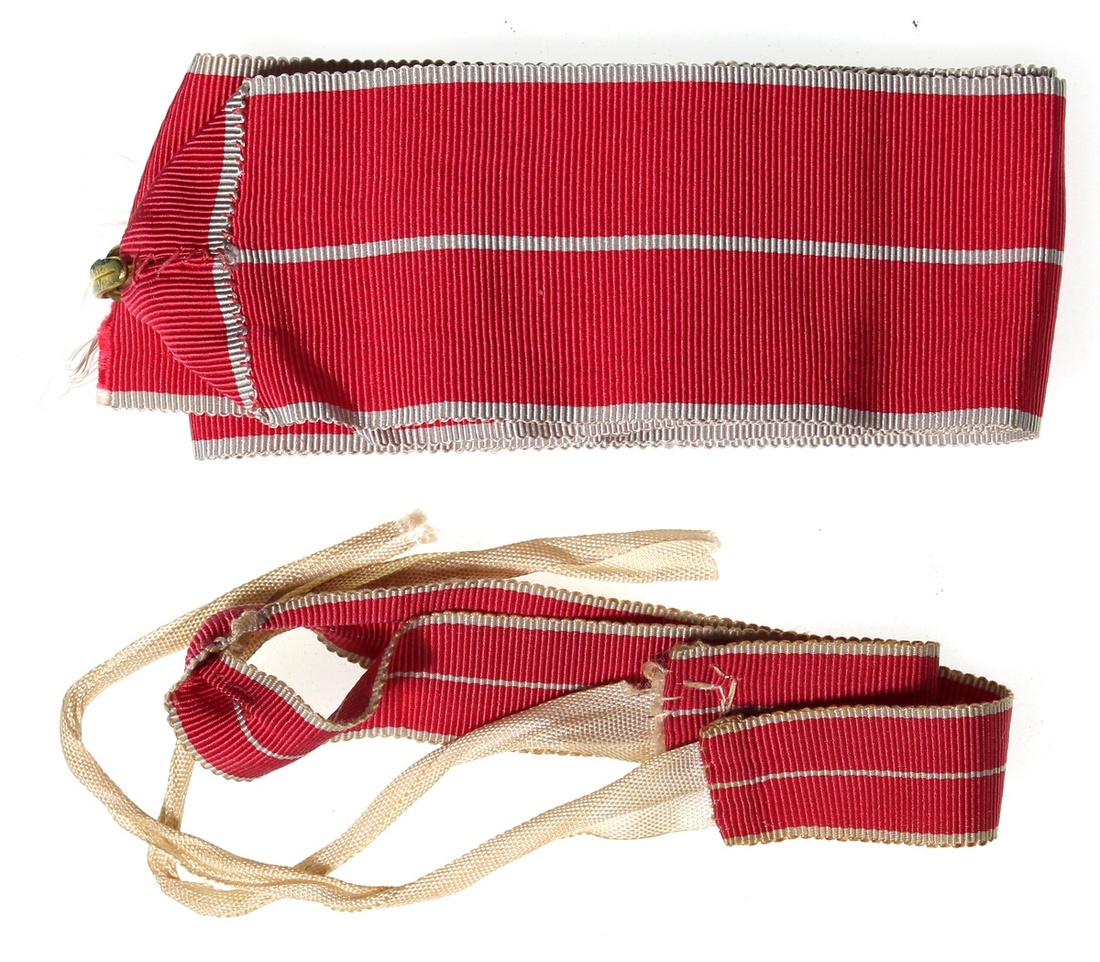 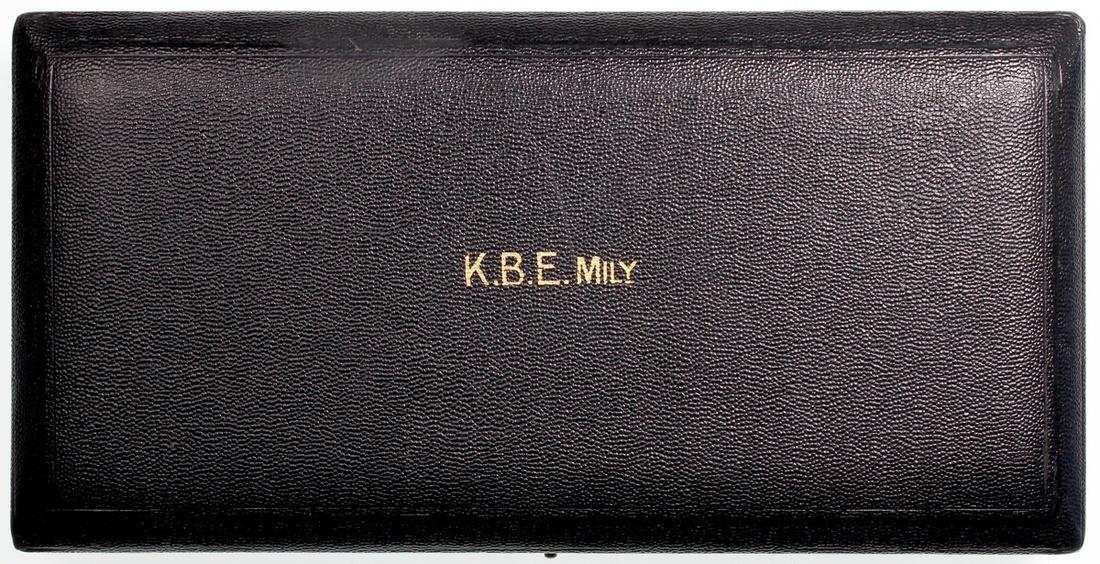