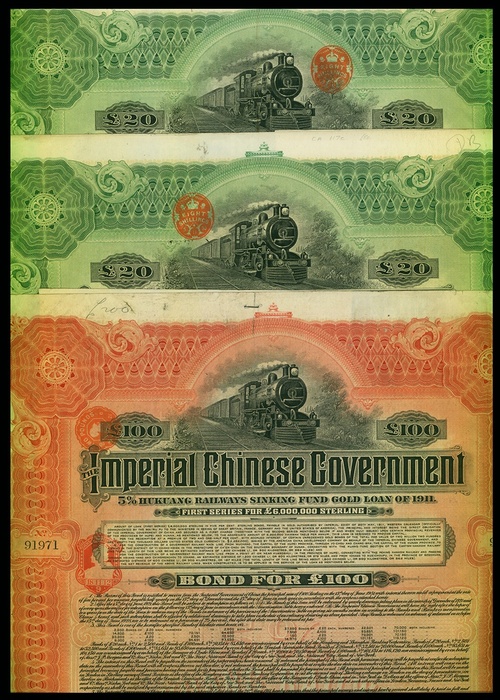 1911 Imperial Chinese Government, 5% Hukuang Railways Gold Loan, 20 pounds (2) and 100 pounds, issued by Deutsch Asiatische Bank, The Hukuang Railways Loan of 1911 was for the capital sum of
£10,000,000 of which only the first series of £6,000,000 was issued.
The first series of the loan was, “…authorized by Imperial Edict of
20th May 2011, western calendar (officially communicated by the
Wai Wu Pu to the ministers in Peking of Great Britain, France,
Germany and the United States of America). The principal and
interest being the direct obligation of the Imperial Government of
China and secured as a first charge (together with the second series
mentioned below if and when duly issued) upon certain provincial
revenues of the province of Hupei and Hunan.”
The participating financial institutions which handled the
arrangements for the issuance of bearer bonds were:
The Hongkong and Shanghai Banking Corporation which
issued £1,500,000 in London at 99¾% and in Shanghai at 95%;
Banque de l’Indo-Chine which issued £1,500,000 in Paris at
100½%;
Deutsch-Asiatische Bank which issued £1,500,000 in Berlin at
100%; and
New York Banks: J.P. Morgan & Co, Kuhn, Loeb & Co, the First
National Bank of the City of New York and the National City Bank
of New York which jointly issued £1,500,000 in New York at 97%.
The various denominations of bearer bonds issued by these four
banks are shown on the data tables above.
Coupons were payable on 15 June and 15 December each year.
Scroll down or click
link for Illustration
KUHLMANN - 230
KUHLMANN - 231
KUHLMANN - 232
KUHLMANN - 233
KUHLMANN - 234
KUHLMANN - 235
KUHLMANN - 236
KUHLMANN - 237
Back to Main Index
Page...152
The historical events which were linked to this loan were dramatic.
The opposition to the loan agreements, coupled with public outrage
at the Imperial Chinese Government’s decision to not only
nationalise all of China’s Railways, but also to grant major
concessions to foreigners, significantly contributed to the downfall
of 3,000 years of imperial dynastic rule.
The initial loan agreement was negotiated by the British & Chinese
Corporation, but then French and German interests exerted pressure
to be allowed to participate in the financing of the project, and finally
the direct intervention of American President, William Howard Taft,
secured a share of this project for American capital enterprises.
The loan was secured upon a first charge of salt, rice and likin1 taxes
of Hunan and Hupeh which resulted in opposition from provincial
governments as well as from a rich merchant group who were
advocates of the “Rights Recovery Movement”. This group
demanded cancellation of the Hukuang Railways Loan, mainly as
they wished to promote their own business interests and gain a share
in the various infra-structure development programmes. However
there was also a patriotic element to this movement as there was
considerable objection to the granting of extra-territorial rights and
jurisdiction over sections of Chinese territory to foreigners.
Attempts by the central Imperial Government to pacify the leaders
of the “Rights Recovery Movement” failed and the opposition groups
actively mobilised students, workers and peasants to make violent
protests against the Chinese Imperial Government.
Although there were many contributing factors, the controversy
surrounding the Hukuang Railway Loan of 1911 and the subsequent
reaction by the Chinese population at large, is believed to be one of
the sparks that ignited the Chinese Revolution and significantly
contributed to the downfall of the Chinese Imperial Government.
(K-234, K-235), very fine (3) 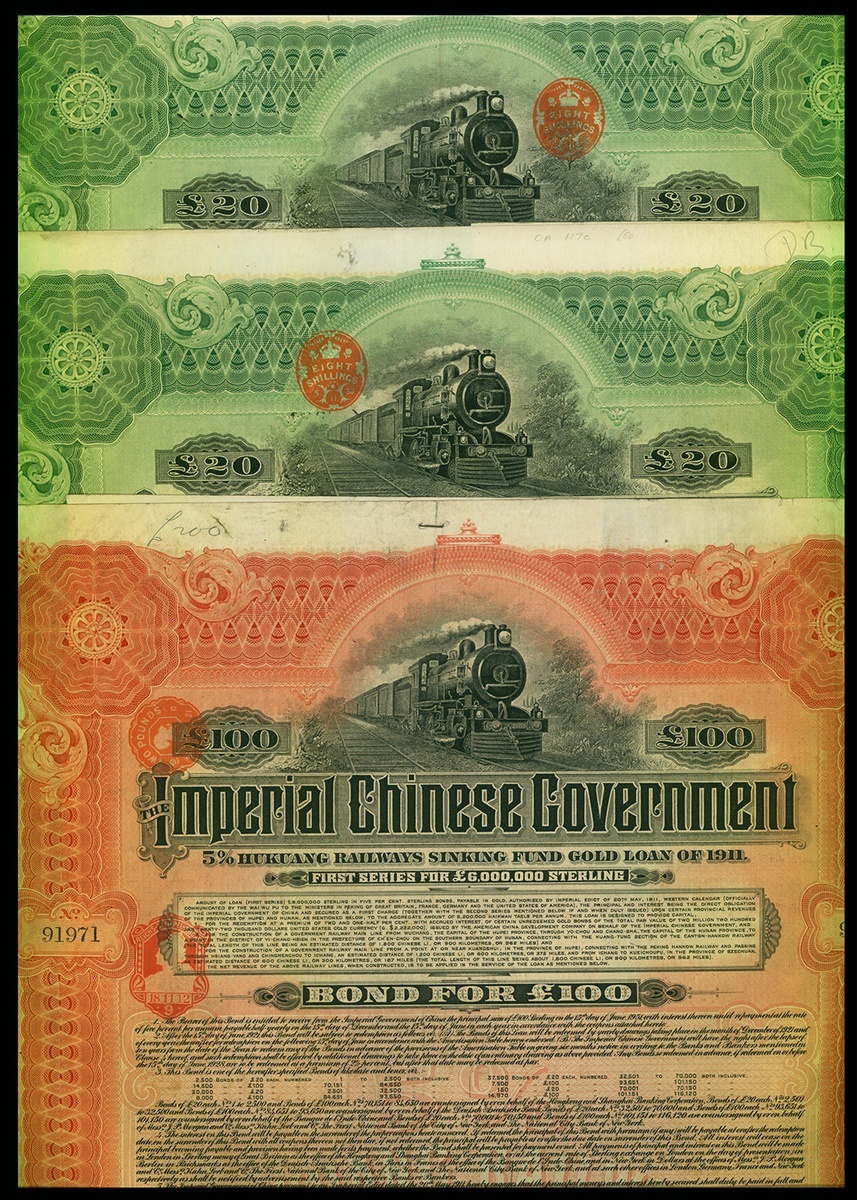