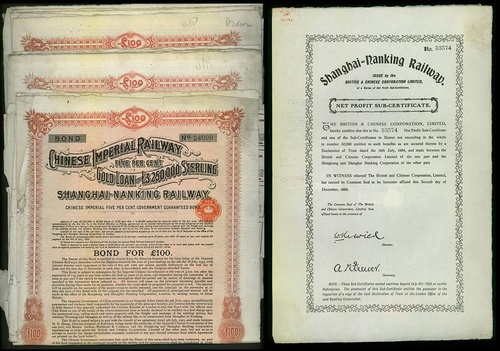 The Shanghai-Nanking Railway Loan of 1903 was for the capital
sum1 of £3,250,000. The loan was “…authorised by Imperial Edict
of 9th June 1903 officially communicated by the Wai Wu Pu to the
British Minister in Peking, guaranteed as to interest and principal by
the direct obligation of the Imperial Government of China and having
a first charge upon the security of the permanent way, rolling stock
and entire property with freight and earnings of the existing railway
line between Woosung and Shanghai as well as of the line about to
be constructed between Shanghai and Nanking.”
The participating financial institutions which handled the
arrangements for the issuance of bearer bonds against the loan were
the Jardine, Matheson & Company and the Hongkong and Shanghai
Banking Corporation representing as joint agents for the British and
Chinese Corporation Limited. Bearer bonds were offered at different
dates as detailed in the table above. However, it is evident that only
29,000 bonds were issued instead of the planned 32,500. The
Coupons were payable on 1st June and 1st December each year.
The purpose of the loan was for the construction of a railway between
Shanghai and Nanking. This railway passed through areas which
were regarded as the main tea, cotton and silk areas of China.
It is interesting to note the involvement of Jardine, Matheson & Co.
and that the earlier issue of the bonds were countersigned by William
Keswick (1834 – 1912) who was a British Conservative politician
and businessman. The Keswick family had a long association with
Hong Kong and the Jardine, Matheson & Co.
William Keswick was born in 1834 in the Scottish Lowlands. His
grandmother, Jean Jardine Johnstone was an older sister of Dr.
William Jardine, co-founder of Jardine, Matheson & Co. William
Keswick arrived in China and Hong Kong in 1855, the first of six
generations of the Keswick family to be associated with Jardine,
Matheson & Co.
Keswick established a Jardine, Matheson & Co. office in Yokohama,
Japan in 1859 and then returned to Hong Kong to become a partner
of the firm in 1862. He became managing partner or 'Tai-Pan' of the
firm in 1874 until his departure in 1886. He left Hong Kong in 1886
to take control of Jardine, Matheson & Co. in London. He remained
the firm's managing director until his death in 1912.
Some later duplicate bonds were counter-signed by Sir William
Johnstone “Tony” Keswick (1903-1990). "Tony" Keswick was the
grandson of William Keswick. He arrived in the Far East in 1926. He
remained a Director of Jardine, Matheson & Co. even after he had
left the Far East. He was in charge of the Jardine, Matheson & Co.
Shanghai Office from 1935 until 1941.
(K115 and K116), about fine, tears at borders as usual with this type (10 pieces in total) 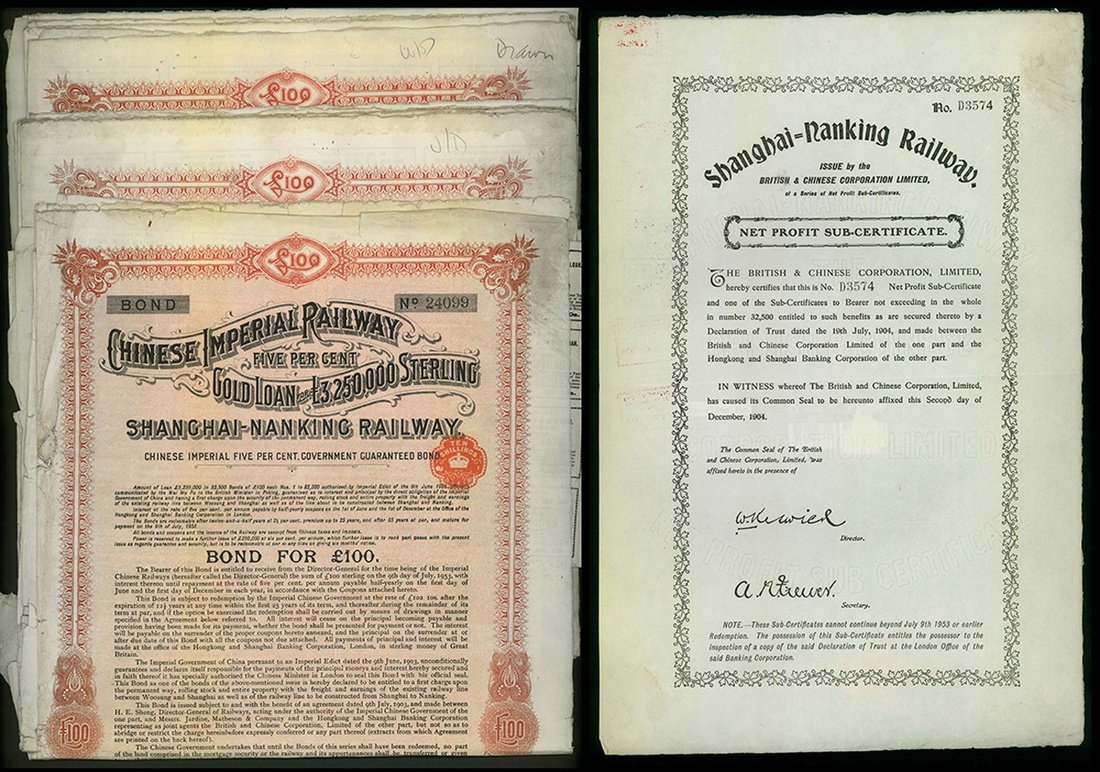