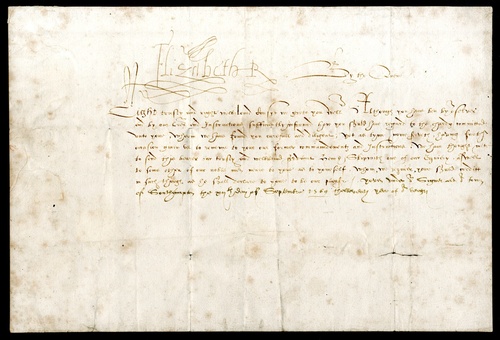 Great Britain
Queen Elizabeth I
The Imprisonment of Mary, Queen of Scots
1569 (16 September) letter signed on laid watermark paper by the Queen "Elizabeth R" to the Earl of Shrewsbury:

"Right trusty and right welbeloved cousyn, we grete you well. Although you have ben by orselves and by our lres and instructions sufficiently informed how you should have regard to the chardg committed unto youe, wherin we have found you carefull and dilligent; yet as tyme nowe serveth having for the occasion given us to renewe youe our former commaundements and instructions. We have thought mete to send this bearer our trusty and welbeloved servaunt Henry Skipwith one of our Equiery, as well to some other of our noble men neare to youe as to yourself, whom, we requier youe shuld creditt in such things as he shall declare to youe to be our pleasr. Given under or. signet at or. town of Southampton the XVIth day of September 1569, the elventh yere of or. reign."

Endorsed on reverse "To our right trusty and right welbeloved cousyn the Erle of Shresbury".

Housed in a glazed (355x325mm.) frame in which it is sold, though the document is easily removed. Some reinforcements along folds and usual foxing associated with documents of this age; a superb example of Elizabeth I's signature and a document of utmost historical importance.


To appreciate this document in full, one must refer to the Calendar of the Cecil Papers of Hatfield House and the Calendar of State Papers relating to Scotland of the British Museum:

Queen Elizabeth to the Earl of Huntingdon, Shrewsbury and Viscount Hereford - Elizabeth sends Skipwith to relay the Queen's instructions. Endorsed "sent by Mr. Skipwith the equyry".

The Queen's instructions by Henry Skipwith for the Earls of Shrewsbury and Huntingdon, and Viscount Hereford

"Ye are to understand how of late the Scottish Queen's cause has been by us considered, and put in deliberation to bring it to some reasonable end. We find that she, and such as solicit and labour most for her cause, intend to proceed in it otherwise than is meet or that we can consent to for our honour. We have cause to doubt that when she and her friends perceive their purple not agreeable to us there will be some secret device to procure her escape, both perilous and dishonourable to us. The Earl of Shrewsbury shall therefore take such care of her safe custody as in the beginning he had commandment, and beware of practices by such as resort out of Scotland without evident cause, being sent or permitted by Her Majesty. For the more surety the Earl shall, as he seeth cause, advertise the Earl of Huntingdon and Viscount Hereford, and require their assistance to withstand any attempt to convey her away by force, and that they be in readiness with such company of horsemen as they think themselves well assured of; and in their own persons assist the Earl to withstand any such attempt. Meantime the Queen will consider what is meet to do in her cause. These premises, with other particular things committed to him, Henry Skipwith shall declare to every of the said Lords."

This dramatic message likely being the one Skipwith is charged with delivering in our letter.

"By the Queen's Majesty's letters and credit to Mr. Skipwith, I see her pleasure for this Queen's safe keeping, wherein I shall have the assistance of the Earl of Huntingdon and Viscount Hereford to reset any attempt to escape ... Would that my body were fit to serve but for want of rest, I hourly feel danger to my life by 'relaps', notwithstanding all counsel of physic in this 'my restless charge'."

Acknowledging by receipt of her letters and commands by Mr. Skipwith, which he will obey to the uttermost of his power and will execute them as far as the weakness of his "painful bodie" will suffer.

Requiring Huntingdon to take charge of the Queen of Scots. They are to confer how to reduce the Queen's train to 30, and to give order prohibiting such common resort to the Queen, and her sending posts as she hath done to the burden of the Queen's poor subjects.

Notes: After defeat at the battle of Langside, Mary, Queen of Scots fled from Scotland to Carlisle Castle. In January of 1569, Mary was moved gradually toward Sheffield and the Earl of Shrewsbury's home where she was to be held permanently. Owing to a hold up in supplies for the Earl's home, Mary was moved to Tutbury, arriving 4th February 1569. A sketched plan of Mary's accommodation at Tutbury is held by the British Library (MS Additional 33594, f. 174). It is understood that Mary was moved to Wingfield Manor in April though returned to Tutbury in September with an increased guard following Leonard Dacre's attempts to liberate her. It is probable that Mary is at Tutbury at the time of this letter given the reinstatement of Shrewsbury's orders for Mary's imprisonment.

Henry Skipwith (-1588): Keeper of Ampthill great park in 1565, equerry of royal stables by 1569, Justice of the Peace for Leicestershire ca. 1569, steward of crown lands 1570, commissioner to enforce the Acts of Uniformity Supremacy for the dioceses of Lincoln and Peterborough, and commissioner of musters for Leicestershire in 1583.

Skipwith was first described as the Queen's servant in April 1559 when he was granted the reversion to the keepership of Ampthill Great Park. In our letter, Skipwith is employed by Elizabeth to a secret message to the Earls Huntingdon and Shrewsbury and Viscount Hereford regarding Mary, Queen of Scots. In 1571, Skipwith was again employed as during the Duke of Norfolk affair as Lord Burghley spy and in guarding the Duke of Norfolk at the Tower of London. It is Skipwith who discovered the cipher and channels whereby Norfolk was communicating with the world outside, and secured his admission to receiving £2,000 of Mary's money from the bishop of Ross.

Skipwith was never knighted probably by choice as a trusted though secretive servant to the Queen. He was however handsomely rewarded for his services in leases of land shortly after the 1569 troubles referred to here.

Henry Skipwith's sister, Margaret Skipwith was well connected with the crown already, having been rumoured to be a candidate for King Henry VIII's wife, and most certainly among his mistresses. Margaret would late marry Sir Peter Carew a staunch opponent of Mary Tudor's marriage to Philip of Spain and important proponent of Elizabeth's reign. 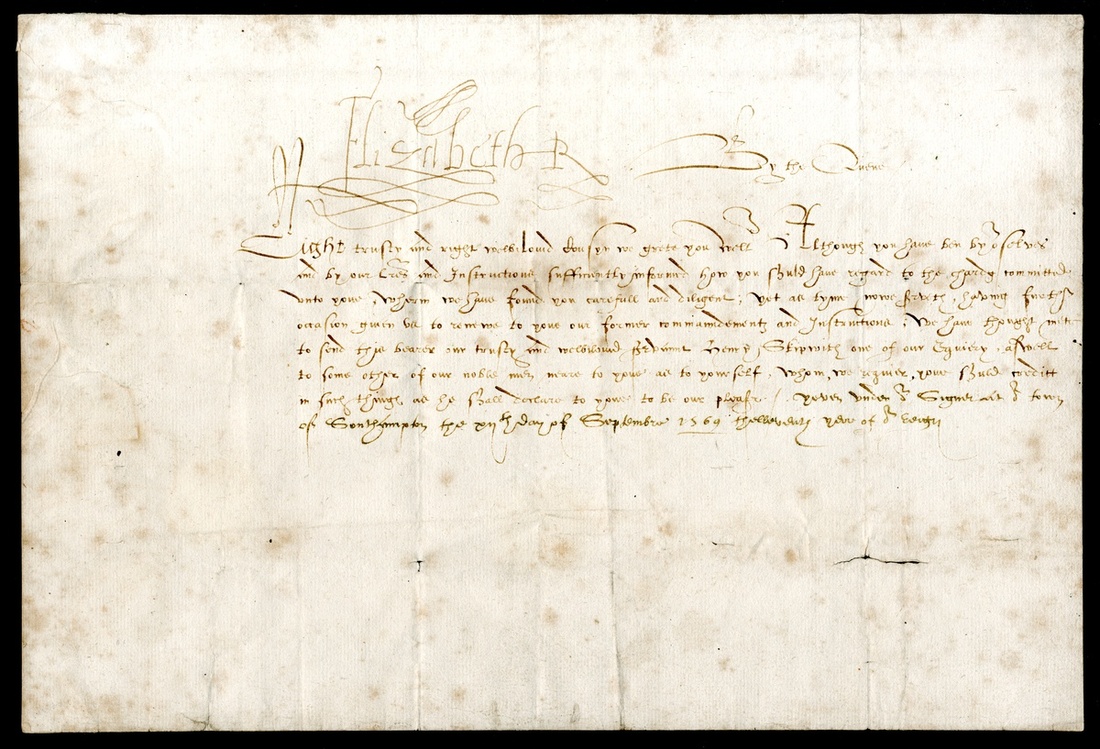