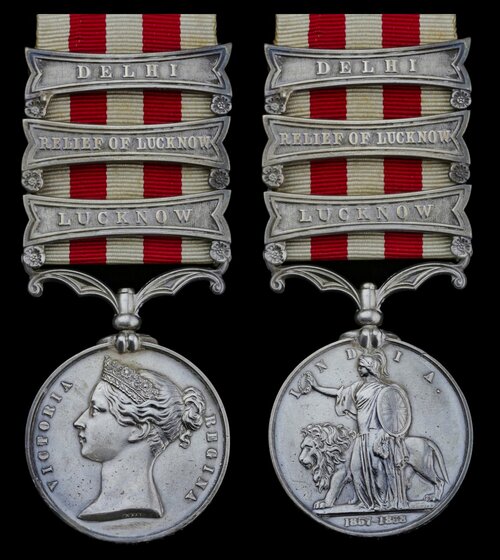 The exceptional 3-clasp Indian Mutiny Medal awarded to Colonel J. Goldie, 9th (Queen's Royal) Lancers, who was mentioned in dispatches and recommended for the V.C. for his exemplary leadership of a squadron at Shumshabad on 27 January 1858

James Goldie was born at Calcutta on 5 November 1836, the first son of Colonel Alexander Goldie of the 69th Bengal Native Infantry. Colonel Goldie was an experienced officer who had served in India since the Mahratta Wars, and when he retired he took his family to England, taking up residence at Walthamstow House, Essex. In 1853 he wrote to Viscount Hardinge, Commander-in-Chief of the Forces, in the following terms:

'My Lord, my only two sons are bent on following their father's profession, and I have educated them accordingly; the late General Caulfield, an East India Director, gave me hopes of appointing them Cadets, but since his death, my applications to other Directors have not been successful; in any strait I write to Your Lordship to whom I already owe so much, with an earnest request that they be allowed to purchase a Commission in His Majesty's service - either Cavalry, or Infantry - for my eldest son James Goldie who is now seventeen years of age, and is supported by Dr. Grieg of Walthamstow by whom he is being educated, to be fully prepared to pass the Engineer's examination at Addiscombe: Your Lordship knows well the difficulty we often experience in providing for our sons in the Company's service.'

On 18 July 1854 young James duly paid £840 (£94,000 in today's money) for a Cornetcy in the 9th (Queen's Royal) Lancers, a Cornetcy which Viscount Hardinge directly facilitated. His father wrote again to Hardinge:

'I request you will do me the favour to confess to the Right Honourable the Commander in Chief my most respectful and sincere thanks for His Lordship's sanction to the purchase of a Cornetcy for my eldest son; the purchase money is lodged with Messrs. Coutts & Co., Bankers of the Strand.'

Personal tragedy and an accolade withheld

Goldie joined the Regiment at Umballa, India on 15 January 1855. His father and sisters (no doubt part of the 'Fishing Fleet') travelled to India with him. The 9th Lancers had already been in India for twelve years, and were to serve with great distinction during the Indian Mutiny. Goldie was present at the Battle of Bundlekeserai on 8 June 1857, when General Sir Hope Grant led an audacious charge which evicted the rebels from their entrenchments and cleared the way to Delhi. Goldie is mentioned in Brevet-Major Anson's Letters as having volunteered to work in the advanced batteries, under heavy fire, for several days during the Siege. He was joined in this dangerous mission by Lieutenant 'Bashi' Evans (see Lot 327). After Delhi fell, Goldie fought in the actions of Bolundshuhur (28 September), Allyghur (5 October), Agra (10 October) and Kanouge (23 October).

He then took part in Lord Clyde's Second Relief of Lucknow, which was followed by the Third Battle of Cawnpore on 6 December and the action at Serai Ghat three days later. Goldie commanded a Squadron at Shumshabad on 27 January 1858. The following is extracted from The Ninth (Queen's Royal) Lancers by F. H. Reynard:

'On the 27th (January 1828) two squadrons of the regiment were engaged at the action of Shumshabad, and with Hodson's Cavalry pursued the enemy eight or nine miles capturing four guns, Goldie's squadron charged into 1500 of the enemy and killed 300. Lieutenant Goldie (whose father and two sisters were murdered at Furtigarh when the Mutiny broke out) was recommended for the V.C.'

For his exceptional bravery and example at Shumshabad, Goldie was indeed recommended for the Victoria Cross in a letter sent to Horse Guards by Lord Clyde on 7 June 1859. This letter was itself based on the findings of an independent Board of Officers, but the Secretary of State for War never permitted the award, his Under Secretary writing the parsimonious comment:

'It does not appear that Lieut. Goldie did more than gallantly lead the squadron of his Regt. to which he was attached… might it not be proper before the Distinction is awarded, that some more particular information respecting the service should be obtained?'

Goldie was at least mentioned in the Right Honble. Adrian Hope's dispatch to Lord Clyde, dated 27 January 1858 and published on 16 April 1860:

'Brought to notice for having "done his duty in a very gallant and praiseworthy manner" when charging a very superior force of the enemy with a detached squadron at the action near Shumshabad.'

Goldie purchased his Captaincy on 21 February 1860, transferring to the 17th Lancers on 17 April that year, and the 16th Lancers on 25 July 1865. While on furlough he married Magdalene Agnes Goldie at St. James's Church, Piccadilly on 5 August 1865. He held several Staff appointments, including that of Deputy Assistant Adjutant General at Madras from 10 July 1868. He was appointed a Major in the 6th Dragoon Guards on 3 July 1877, rising to become its Colonel in 1885; sold with a file of copied research. 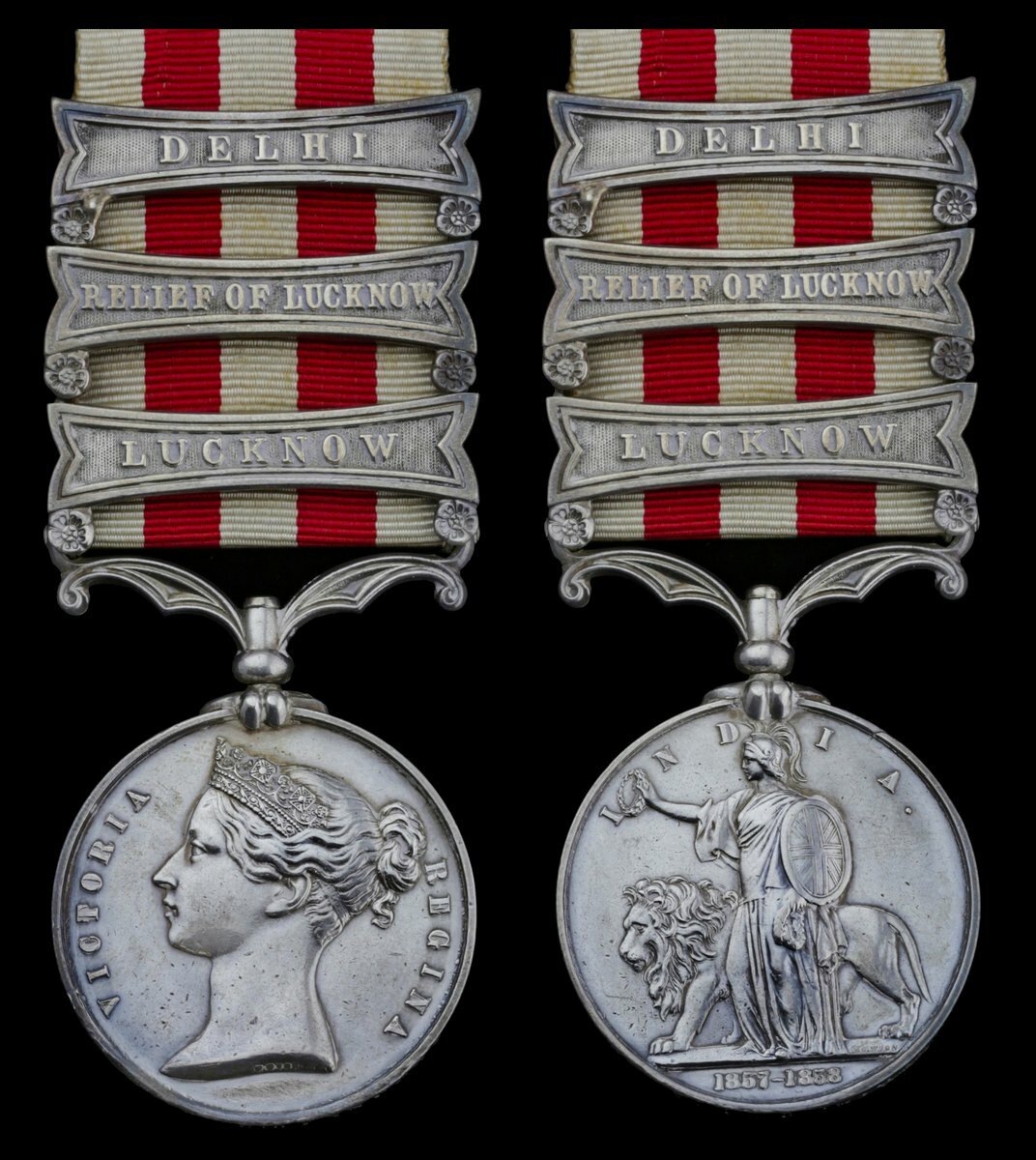