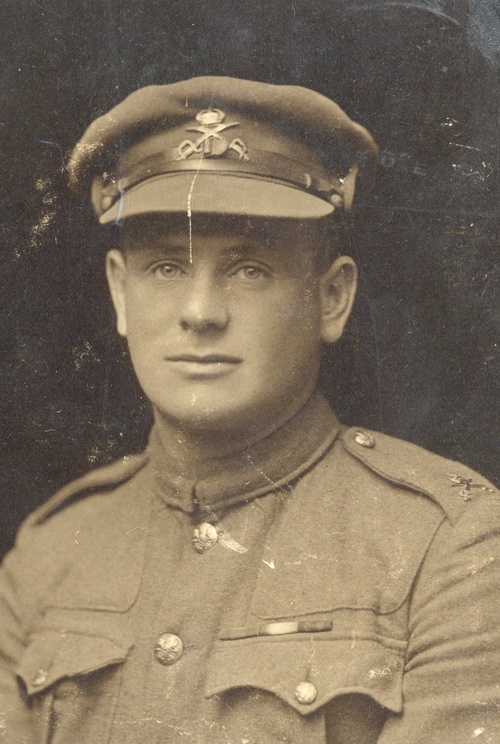 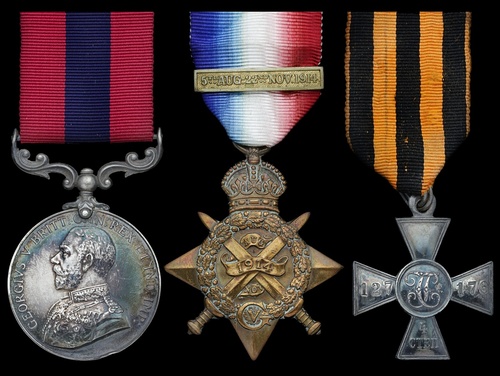 'For skill and gallantry in leading his men in house-to-house fighting at Le Gheer, on 21st October.'

Charles Wilcox was born around 1890 at Bridgwater, Somerset, the son of Mrs S. E. Wilcox of 298th Street, La Rochelle, Johannesburg, Transvaal, South Africa. Despite this family connection to the southern hemisphere, the 1911 England census records him as a single Lance Corporal serving with the 1st Battalion, Somerset Light Infantry, and residing at Malplaquet Barracks, Churchill House, Marlborough Lines, Aldershot. Departing barracks in Colchester at the outbreak of war, Wilcox arrived in France on 21 August 1914 with the 1st Battalion, Somerset Light Infantry, in time to fight in the Battle of Le Cateaux on 26 August 1914. Despite some front line Battalions being advised to 'fill up your trenches, with water, food and ammunition as far as you can' (The Mons Myth, refers), a substantial delaying action never happened as orders to entrench and defend often arrived at about the same time as the enemy.

As a result of such unclear or late purpose, the B.E.F. and the French Fifth Army were forced to begin the long withdrawal to the River Marne in late August and early September 1914. This was only ended at the Battle of the Marne from 5-12 September 1914, when desperate Franco-British resistance forced the German Army to retire towards the River Aisne. As they did so, both Armies began to look north and began the series of manoeuvres known as the Race to the Sea, whereupon they made reciprocal attempts to outflank each other between 17 September and 17 October 1914. To the south of Ypres, General Sir William Pulteney, in Command of III Corps, was experiencing some 'anxious days' (A History of the Great War, refers):

'On the 20th the Germans had attacked the advanced posts of the 12th Brigade on his left, driven them in, and occupied Le Gheir (sic), just north of the Lys. A counter-attack, however, drove back the enemy with great loss, and occupied the abandoned trenches.'

Present during this attack, Wilcox led his men forward into the small Belgian hamlet and spent the next 24 hours in vicious house-to-house fighting. The events of the following morning are further described from a German perspective in Fighting the Kaiser's War: The Saxons in Flanders 1914-18:

'On 21 October I. and II./IR 104 approached silently at 6.30am under cover of mist, and overran the trenches of 2nd Btn. Royal Inniskilling Fusiliers by surprise. Carrying their colours from 1870 into action for the last time, they stormed Le Gheer and began to dig in. However JB 7 and IR 181 had again been halted by heavy fire well short of the British lines. Lacking flank support, I. and II./IR 104 were overwhelmed by parts of four British battalions in fierce bayonet fighting. Le Gheer was lost, after costing the regiment 150 killed, 193 wounded and 134 captured. Major Larras of III./IR 104 was also killed by a shot from Frelinghien brewery that afternoon.'

The loss of Le Gheer and high casualty rate on 21 October proved a strategic disaster for the German Army and despite a series of small-scale dawn and night attacks, the hamlet proved a constant thorn in the side of the enemy. From 2 November 1914 attacks on Le Gheer were supported by heavy minenwerfers but made no progress. It ultimately fell to the artillery to pound the houses to dust, essentially wiping it off the map by 1918. For his bravery on 21 October 1914, Wilcox was awarded the D.C.M.

Returning to London at the cessation of hostilities, Wilcox became one of the sparring partners of boxer Joseph 'Joe' Beckett who was in training to take on the Frenchman Georges Carpentier for the European Boxing Union heavyweight title, scheduled to be fought at Holborn Stadium on 4 December 1919. As well as assisting Beckett to glory, Wilcox had his own personal sporting dreams of playing for England at rugby football:

'I am told that Wilcox was a wonderful line forward, although I have never seen him play. He must have been a performer of class, since he was Captain of the Bridgwater team which beat the rest of Somerset a few weeks ago. Wilcox was also a fine swimmer and diver, and a first-class water polo player.'

Six weeks after becoming Beckett's sparring partner, a 16-stone Wilcox took on Seaman Merilees in a novice fight held in the boxing ring of the National Sporting Club on 3 December 1919 (The Newcastle Morning Herald and Miners' Advocate, refers). The events which followed were later described to a coroner by Major Robert Edward Myddleton, who was acting as one of two judges during the contest:

'When the bout began, the deceased for the first thirty seconds had the best of it. He had his man down and subsequently Merilees was boxing on the defensive. Deceased was following him round the ring, the other man avoiding him, when suddenly Merilees hit him on the body and once on the jaw, and he went down. The blows were a double -one, two. Deceased fell in an awkward position and the whole of his back hit the floor, his head doing so very heavily.'

Described as 'one of the heaviest men witnesses had seen in the ring', it soon became clear that Wilcox was unconscious. Removed to Charing Cross hospital at 7.30pm, he was subject to an operation to remove pieces of skull and allow decompression to the brain. It was during the procedure that a large clot was discovered and Wilcox died not long thereafter from cerebral haemorrhage. Merilees was informed of his death by a telegram to H.M.S. Hearty, witnesses later stressing that he' fought fairly' and 'without partisan feeling'.

"I feel his death keenly," said Beckett. "You know he had a great career in the Army, having won the D.C.M., M.M. (sic), and Croix de Guerre (sic). He escaped from Germany when a prisoner. He was a thorough sportsman."

Charles Wilcox is buried at Wembdon Road Cemetery, Bridgwater, Somerset. Recording his surname as 'Willcox', the C.W.G.C. records note that he sometime transferred to the 3rd Battalion, Somerset Light Infantry. Given the extremely unusual circumstances of his death and having survived the duration of the Great War from the very earliest engagements, it appears that his mother saw to it that his gravestone would bear the extremely poignant inscription, testament to the character and passions of her son.

According to the Somerset Light Infantry Roll of Individuals entitled to the BWM and VM, his medals were returned around 1919. This is further confirmed in an accompanying letter from the M.O.D. Army Medal Office at Droitwich, dated 16 October 1985, which confirms that his British War Medal and Victory Medal were returned to stock 'undeliverable' with no record of them having been re-issued. They are therefore available for issue to the Legal Beneficiary after the completion of formalities. This thus confirmed as his full entitlement.

Sold together with the his original identity tag, impressed '8572 C. Wilcox Som. L.I. C.E.', with a contemporary portrait of the recipient wearing the ribbons of the D.C.M., 1914 Star and Russian decoration, and private research. 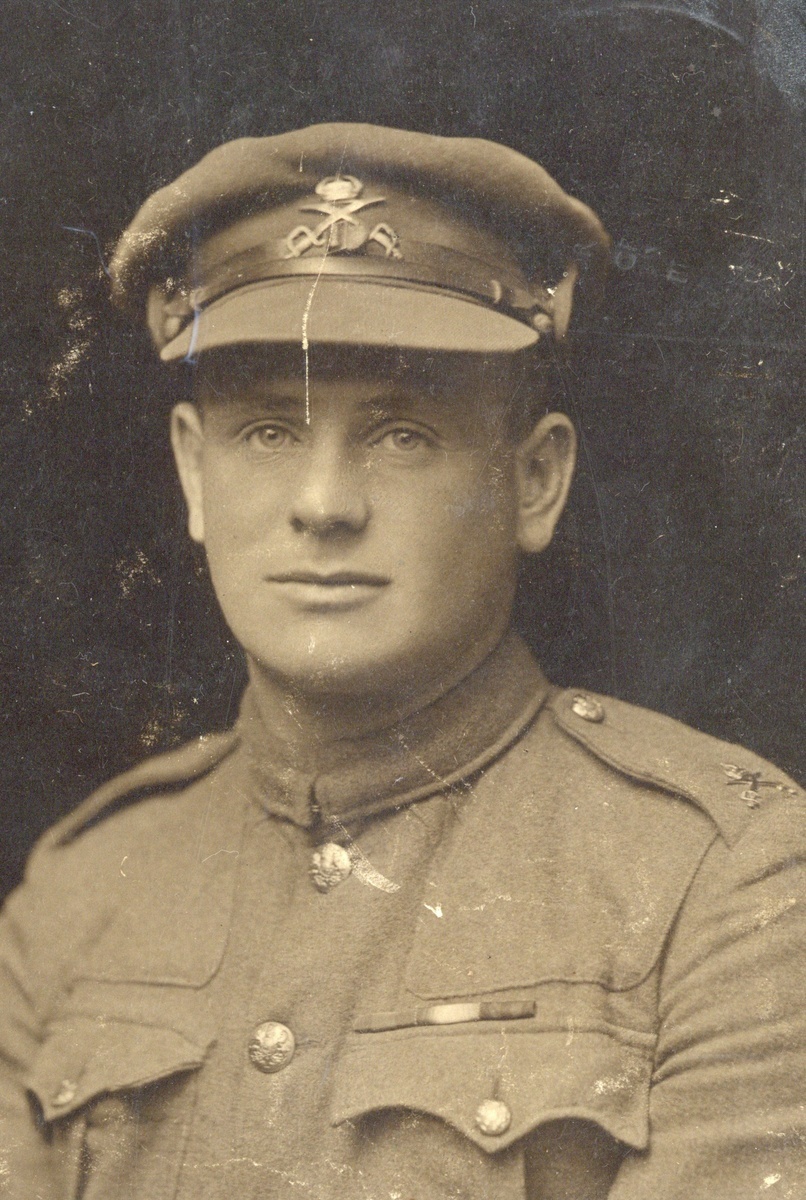 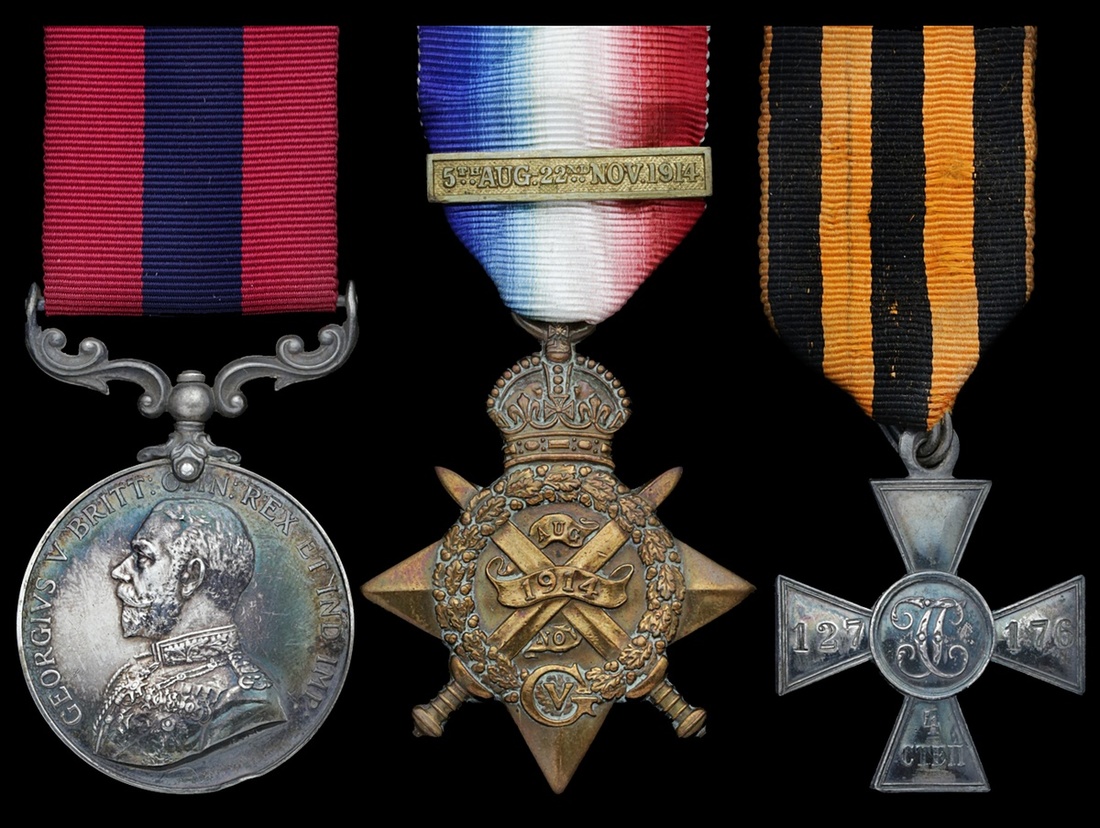