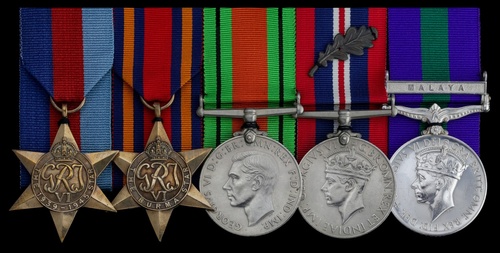 'Generally we aircrews were kept in the dark about who we were dropping to, in case of a forced landing and being captured and interrogated by the Japanese. We'd heard all about their horrific treatment of prisoners, alive or dead. They seemed to think that killing just wasn't enough … We thought about that on the long-range sorties we did that summer of '43, down on the Arakan front.'

A Navigator in Dakotas of No. 31 Squadron describes one of numerous nightmare scenarios facing him and his gallant supply-aircrew; Burma Drop Zone, refers.

A long-served Wireless Operator in Dakotas of No. 31 Squadron, he participated in regular supply drops to Tiddim, Kohima and Imphal, in addition to acting in direct support of Orde Wingate's Chindits in Operation "Thursday" in early 1944, a perilous period of active service vividly documented in the pages of Roger Annett's Drop Zone Burma; so, too, in the entry for his pilot - Peter Bray, D.F.C. - in Graham Pitchfork's Airmen Behind the Medals

'This officer had proved himself an exceptional and highly proficient Wireless Operator. He has completed a large number of operational flying hours often flying during the worst monsoon weather. Pilot Officer Webb has achieved some outstanding results and has at all times set an inspiring example by his keenness, courage and devotion to duty.'

George Basil Webb was born at Brotton, near Saltburn, Yorkshire in February 1911 and was educated at Coatham Grammar School, Redcar.

Having served in the Auxiliary Air Force in 1936-38, he was called-up in May 1940, as an A.C. 2 in the Royal Air Force Volunteer Reserve, and qualified as an Air Gunner in September 1941. Posted to the Middle East in June 1942 and thence, in October of the same year, to India, he joined No. 60 Squadron, a Blenheim unit. The Squadron was subsequently re-equipped with Hurricanes and Webb, who was re-mustered as a Wireless Operator, joined No. 31 Squadron on the Burma front in October 1943. Thus commenced a protracted period of operational flying in the unit's Dakotas.

As related by Roger Annett in Drop Zone Burma, 31 Squadron carried out the lion's share of supply drops throughout 1943:

'The heavy workload of sorties continued throughout the year in the most hazardous flying conditions imaginable - monsoon weather and thunder-cloud turbulence, mountains up to 8,000 feet, and enemy fighters and ground fire.'

The same source quotes Warrant Officer Colin Lynch - a Navigator in 31 Squadron - who describes the realities of enemy ground fire. He relates how his Dak was 'often hit by gunfire and landed with bullet holes in the airframe - once we got a hole as big as your fist from mortar shell fire'. He also describes a tragic encounter with Oscar fighters over Tiddim in late November 1943. The enemy aircraft attacked his Dakota as it approached the DZ at 300 feet, the resultant fire shooting past it and hitting another Dakota, piloted by Flight Sergeant Richards: this broke away, hit a cliff and blew up.

Webb, who was commissioned Pilot Officer in early 1944, would have played a major part in supplying Orde Wingate's Chindits in Operation "Thursday" in March 1944, No. 31 Squadron flying-in troops, mules and supplies, and evacuating casualties from the temporary airstrips "Aberdeen" and "Broadway".

Meanwhile - unlike Japanese A.A. fire - the weather was breaking up:

'The weather was continuing to deteriorate and the pouring rain, low cloud and turbulence, together with the terrain, made sorties to the Chindits perilous in the extreme. On 24 March, Wingate himself was killed in an air crash, caught in a storm when flying to India to report. Supply dropping flights could only be made because the Allied air forces had established air superiority over the Japanese, but there was still anti-aircraft fire - slow moving Daks, at low level, made an easy target' (ibid).

In April 1944, Webb and his fellow aircrew were diverted to the assistance of the gallant defenders of Kohima:

'On both sides of the ridge, the mountains rise up another thousand feet or so and that's where the Japs were, lobbing their shells and mortar bombs into our troops. We had to run the gauntlet to make the drop. There'd usually be a line of Daks going in, one after the other. We dropped them everything you could think of - but mostly ammo, rations and medical supplies. And after the monsoon started we dropped them a load of tarpaulins so they could catch some water. There wasn't much of a DZ even from the start, and as the siege went on, we got down to dropping on what used to be the District Commissioner's tennis court. By then, there wasn't anything much of the place left standing. The trees had all been blasted and were smothered in white parachutes' (ibid).

'The ghastly thing was that we could see it all as we went in on our runs. There were our lads, dug in just a shovel's length from the Jap trenches. Dead bodies lying all around, and wounded crawling back from No Man's Land. And there'd been a hospital there - horrible. What those men suffered doesn't bear thinking about. I'd never seen anything so dreadful and I'd never want to see such things again' (ibid).

Webb remained actively engaged in No. 31's Dakotas until April 1945 and would have participated in further operations in support of the 'race for Rangoon'. He was awarded the King's Commendation for Valuable Service in the Air.

Post-war, he obtained a regular commission as a Flight Lieutenant in August 1947 and held an appointment at Air H.Q. Malaya in 1949. Having then joined Coastal Command in late 1953, and served in No. 202 Squadron, he was transferred to the Reserve in May 1955. He died at Wold Newton, Driffield in June 2001; sold with copied research, including the recipient's service record. 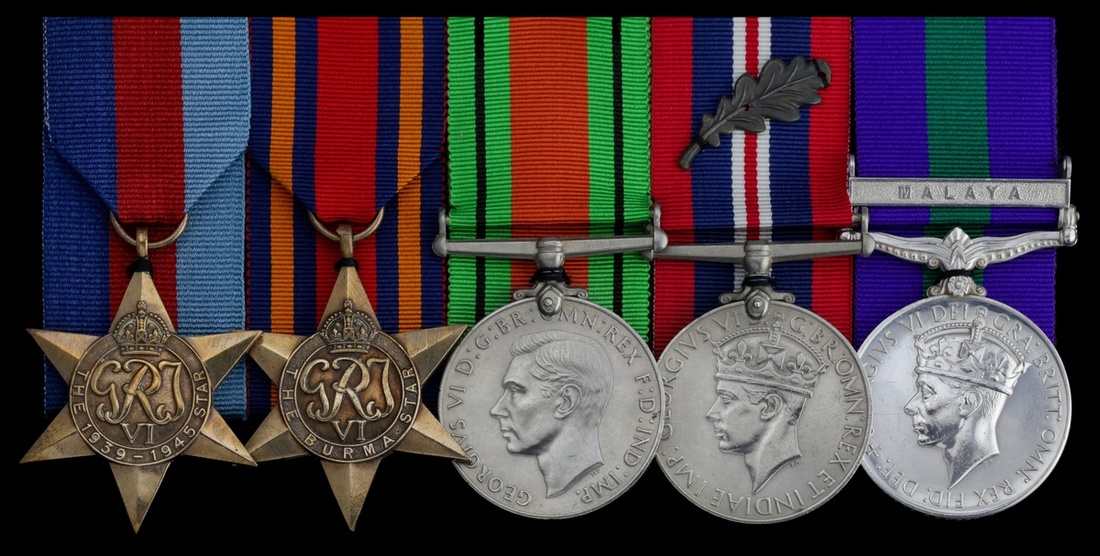