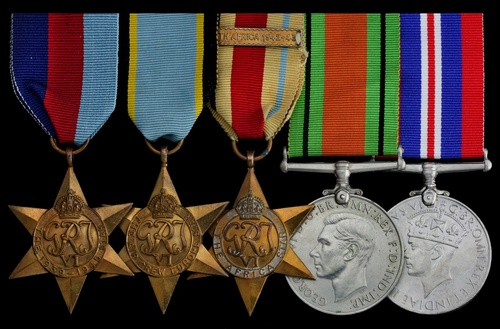 'Reached Trondheim in conditions of excellent visibility. A smoke screen was in operation over the target and attack was made on D.R. from 500 feet at 0050 hours. Intense and accurate flak was encountered from guns on both sides of the fjord and the aircraft was extensively holed in the fuselage and the tail gunner, Sergeant Clifford, received slight shrapnel wounds in his legs. The aircraft returned safely to base and the wounded gunner was removed to hospital for treatment.'

'The courage and determination shown by your crews in the attacks on the Tirpitz was indeed worthy of immediate and outstanding success. Undismayed by their first experience of the full fury of the defences they returned with undiminished ardour to the charge. Never was more asked and never was more given of outstanding devotion to duty. We shall I hope yet find that their efforts have not been in vain. Be that as it may your crews have set an example unsurpassed in the annals of British Arms.'

A message received by the C.O. of No. 10 Squadron from the Air Officer Commander-in-Chief.

An outstanding Second World War campaign group of five awarded to Sergeant T. W. Thain, Royal Air Force, a long-served Flight Engineer who returned home in flak damaged aircraft at an alarming rate and, on one occasion, on the end of a parachute: most notable of his operations was the low-level strike on the Tirpitz on 28 April 1942, when, flat out at 500 feet his mine-laden aircraft - Halifax II W1058 ZA-L of No. 10 Squadron - was badly holed by flak

James Woods Thain qualified as a Flight Engineer in July 1941 and was posted to No. 35 Squadron, a Halifax unit operating out of Linton-on-Ouse in October of the same year. A few weeks later, however, he transferred to 10 Squadron at R.A.F. Leeming, another Halifax unit, and it was in this capacity that he flew his first operational sortie - to St. Nazaire - on 9 January 1942.

In the following month he was quickly introduced to the sharp end of enemy flak, his aircraft being hit in an attempt to locate the Scharnhorst and Gneisenau during the Channel Dash and again, two days later, in a sortie against Cologne. Then further drama followed on the night of the 15th, when his Halifax - bereft of fuel after another sortie to St. Nazaire - had to be abandoned by parachute over Yorkshire. The aircraft crashed near Keld at the top of Swaledale but all the crew landed safely.

In March, No. 10 - and Thain - commenced what would prove to be an extended 'relationship' with the Tirpitz, an attempt being made to knock out the German battleship in Aasen Fjord on the 30th. Ten squadron aircraft were ordered to carry out the attack - alongside 35 and 76 Squadrons - the whole armed with specially adapted Mk. XIX spherical mines. The plan was to drop them from around 500 feet next to the enemy battleship. Owing to poor weather, however, none of the attacking force could locate the target and the majority jettisoned their mines in the general vicinity of Tirpitz's anchorage.

In April, two further attacks were carried out on the Tirpitz, once again mounted by Halifaxes from 10, 35 and 76 Squadrons, in addition to Lancasters from 44 and 97 Squadrons. The first attack took place on the night of 27th-28th, the second on the following night.

Thain flew in the second wave of the second attack, one of seven participating squadron aircraft. As a consequence, he and his fellow aircrew undoubtedly faced the full fury of the enemy, a fact not lost on the occupants of Halifax W1058 ZA 'L', piloted by his regular skipper, Warrant Officer Lloyd. As cited in 10 Squadron's O.R.B., the much holed W1058 ZA 'L' returned to base with a wounded gunner. The cost of the two attacks had been high, the aircraft flown by Wing Commander D. C. T. 'Don' Bennett, 10 Squadron's C.O., among them. He managed to evade capture, reaching the U.K. via Sweden and, as is well-known, establish the formidable Path Finder Force.

So far Thain had flown half a dozen sorties, from which he returned in flak damaged aircraft on three occasions and on the end of a parachute on another. In a raid on Hamburg on the night of 3-4 May 1942 - his first outing since the Tirpitz - his Halifax was again hit by flak, the port inner engine failing on the return trip: it must have been a pleasant surprise for W./O. Lloyd's crew to return in an undamaged aircraft from their next sortie - to Warnemunde - on the night of the 8th-9th.

Thain participated in three further sorties in May, including the 1,000 Bomber Raid on Cologne on the night of the 30th-31st, in addition to the '1,000' raid on Bremen at the end of June. In the interim, he attacked a target in Paris, his log book noting: 'Hit by flak.'

In July, Thain and his crew joined a detachment from 10 Squadron which had been ordered to the Middle East, where it joined up with 227 Squadron at Aqir, Palestine. Known as '10/227', the unit's Halifaxes quickly went operational from advanced landing grounds in Egypt - thus Thains's first trip to Tobruk in the middle of the month.

Between then and the end of November 1942, and latterly as a member of the newly formed 462 (R.A.A.F.) Squadron, he returned to Tobruk on no less than 16 occasions. He also made half a dozen trips to Crete, where Maleme and Heraklion airfields were attacked. Otherwise engaged in direct support of our land forces - thus several outings to attack enemy troops and transport around Mersa Matruh and Solum - he ended his operational tour with a tally of 39 sorties and a total of 280 hours flying time.

Thain returned to the U.K. in early 1943, where he was commissioned and ended the war as Engineer Officer at Woodhall Spa.

Sold with the recipient's original R.A.F. Observer's and Air Gunner's Flying Log Book, covering the period May 1941 to March 1945, together with a copy of a typescript memoir by Squadron Leader H. V. Peterson, D.F.C., who flew in the same wave as Thain in the attack on the Tirpitz in April 1942. 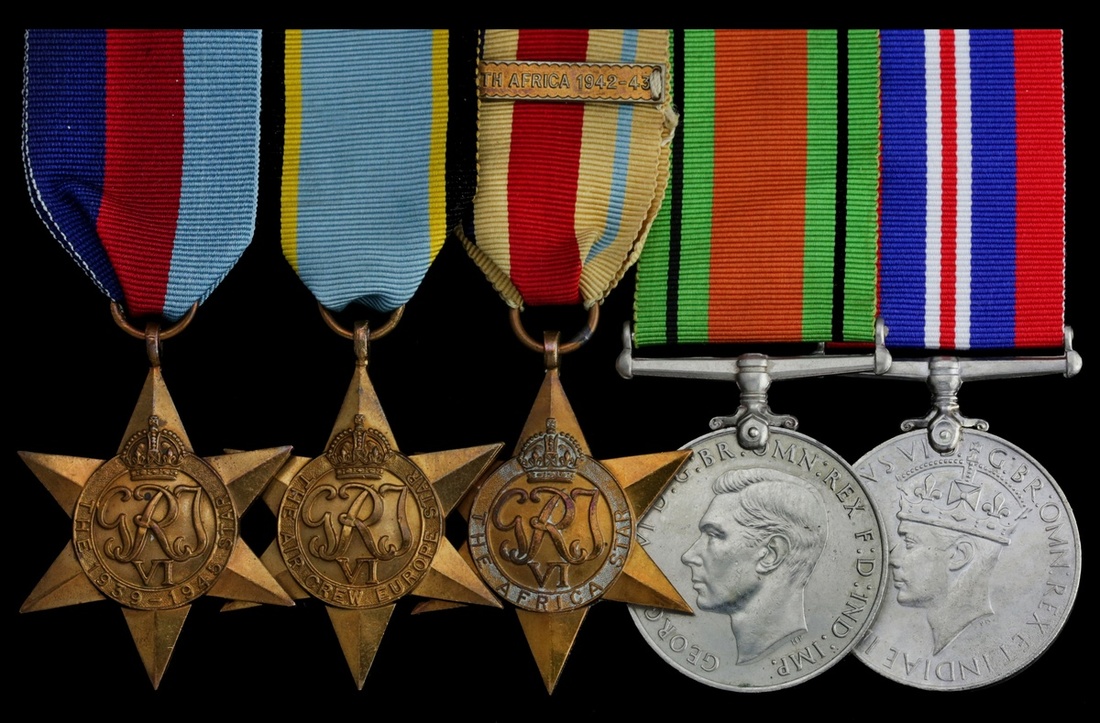