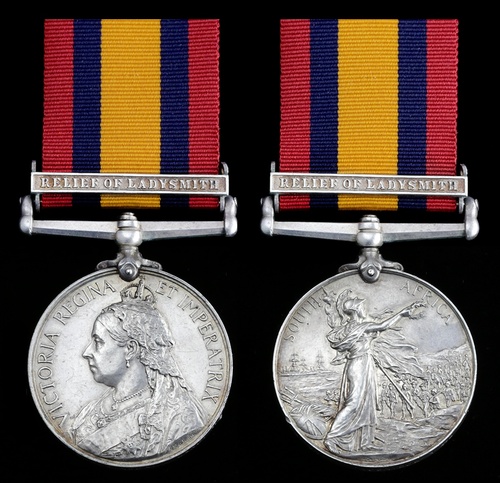 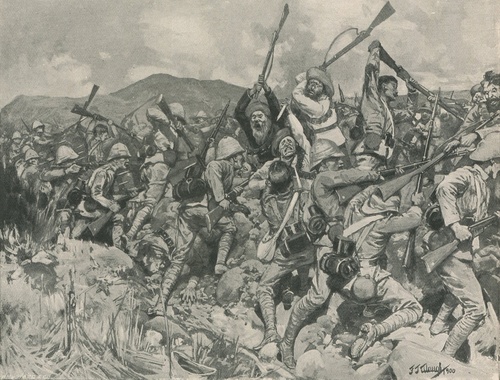 'There has never been another fight quite like Spion Kop. Men have died in greater numbers during scores of other battles both before and afterwards, but never was their dying concentrated into so small an area. Nor was there ever such a spotlighted gladiatorial character to a battle as there was to the montage of horror on Spion Kop'.

The Queen's South Africa Medal awarded to Private E. Robinson, Lancashire Fusiliers, who was mortally wounded at the Battle of Spion Kop on 24 January 1900

E. Robinson served in the 2nd Battalion, Lancashire Fusiliers at the Battle of Spion Kop, one of approximately 1,700 troops under the command of Major-General E. R. P. Woodgate. A reporter for the Manchester Guardian takes up the story:

'If we could get on to the Southern crest of it [Spion Kop] we could probably push on to the northern end, once there we could open a flanking fire on the Boer lines which ran east and west. Spioenkop [sic], properly used was the key that would open the door of Ladysmith. Patrols had reported that there were only a few Boers on it.

Soon after dusk on Tuesday a party set out to make a night attack on the hill. There were Thorneycrofts' Mounted Infantry, the Lancashire Fusiliers, the Lancashire Regiment, two companies of the South Lancashire Regiment and a company of Engineers. General Woodgate Commanded. It was a hand-and-knee march up the southern face - a climb over smooth rock and grass. It was slow.

The crest was not reached until dawn. When dawn came the party found that it was in the clouds. It could see nothing but the plateau - 400 yards across - on which it stood. Trenches were made but it was difficult to determine the right place for them. The Boers were invisible. At last the mist lifted. The curtain rose upon the performance of a tragedy. The Boers - need I say, on another ridge of Spionkop? - began to fire heavily, and our men seemed to have no sufficient protection in the trenches. The space was small; they were crowded together.

I will describe the scene as I saw it from below. I shall always have it in my memory - that acre of massacre, that complete shambles, at the top of a rich green gully, with cool granite walls (a way fit to lead to heaven), which reached up the western flank of the mountain.

To me it seemed our men were all in a small square patch; there were brown men and browner trenches, the whole like an over-ripe barley field. The Boers had three guns playing like hoses upon our men. It was a triangular fire and our men on the Kop had no gun. Men must have felt that they had lived a long life under that fire by the end of the day.'

By the close of the battle, the British casualties totalled 332 killed, 563 wounded and 163 prisoners. Robinson was initially reported as having been missing in action, but is recorded as having died from his wounds at Mount Alice on 27 January 1900. In all likelihood he would have been taken down for treatment at a dressing station, like a good number of those wounded on the Kop (Thank God We Kept The Flag Flying, refers). His name is commemorated upon the Memorial. 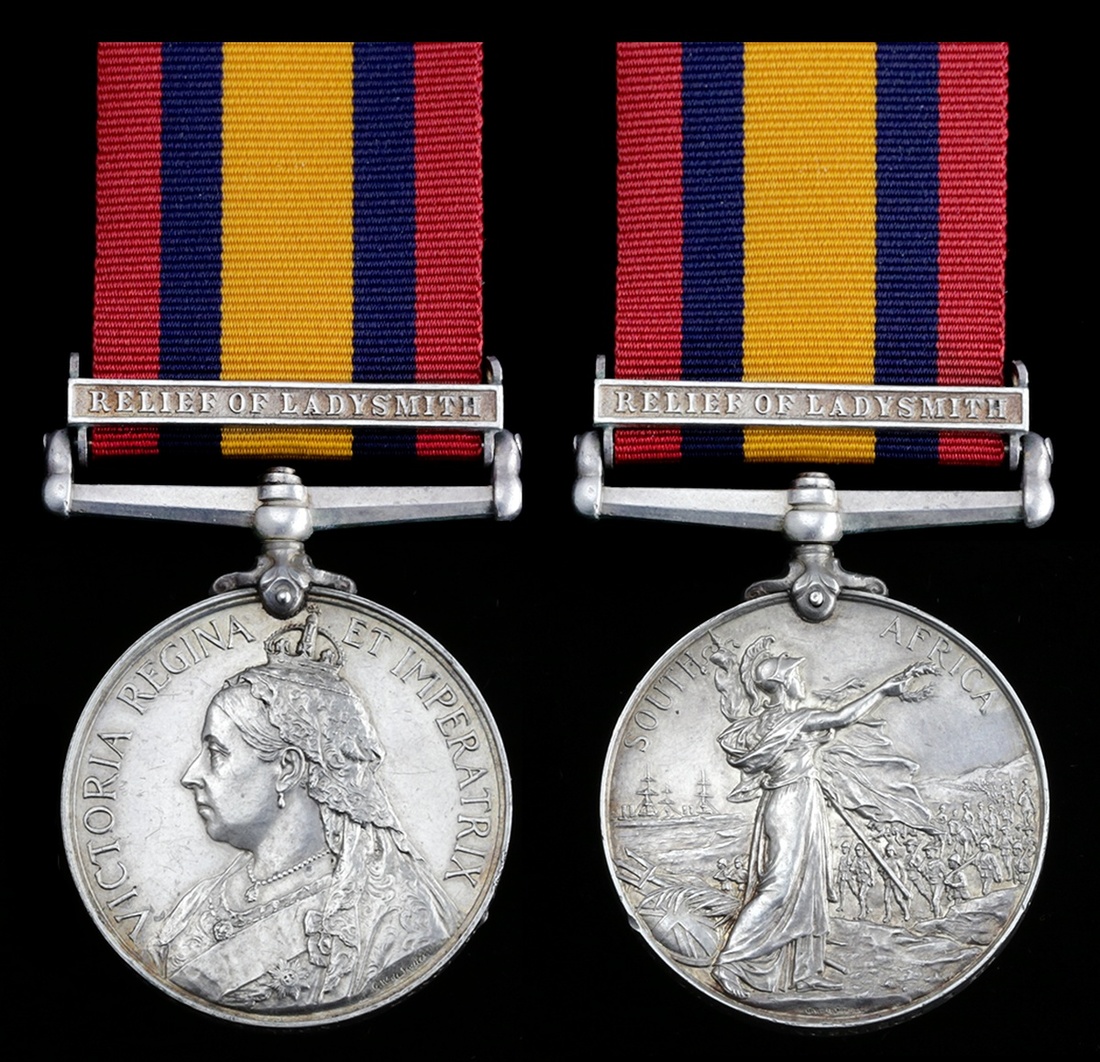 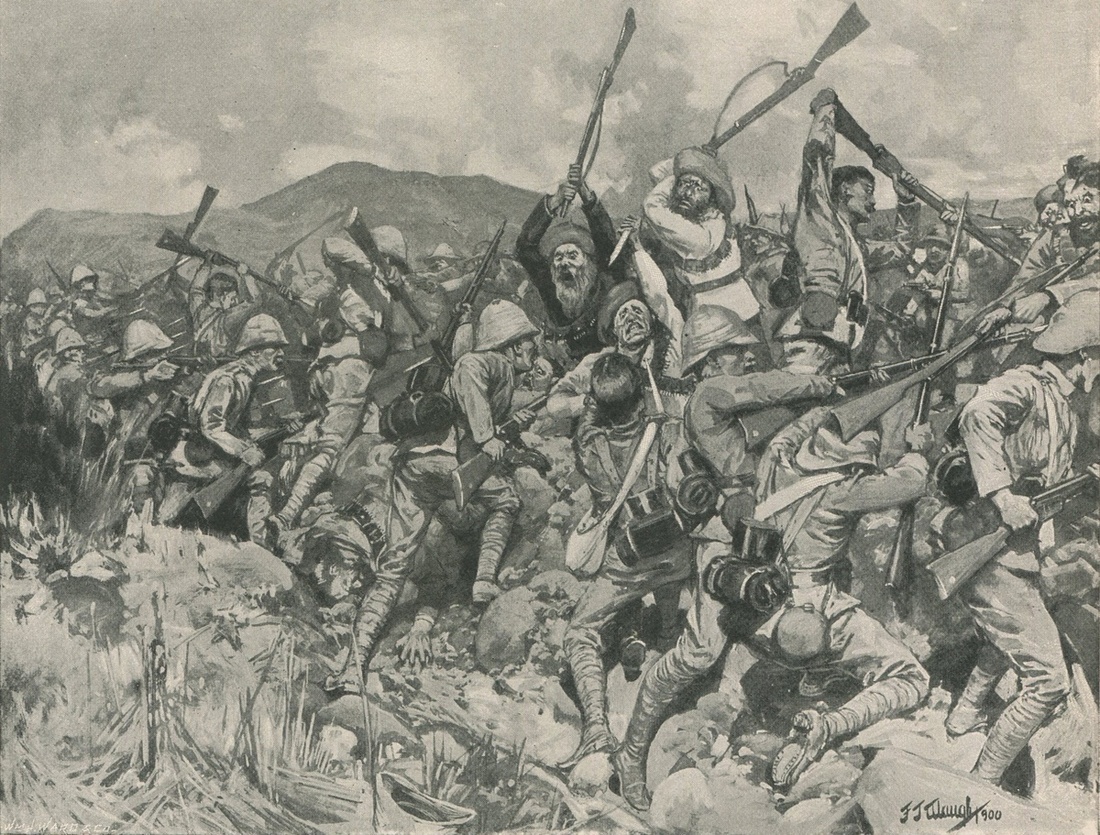