On March 27th, Spink sold the finest known example of the Reddite, an extremely rare silver Crown for a world record breaking price of £396,000.

The Reddite Crown is from the second part of the Glenister collection and is the twin of the The Petition Crown, which sold for £207,000 at Spink in 2007.

The Reddite, a superb pattern crown of 1663 was designed by Thomas Simon and carried a pre-sale estimate of £100,000-£120,000. Having received much attention from collectors and dealers, the Reddite was sold to a telephone bidder for £396,000 (including buyer's premium). This set new world records for both an English Crown and an English silver coin. 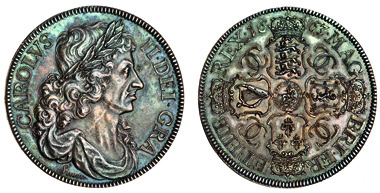